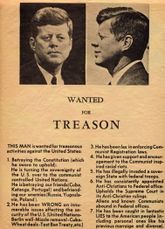 The Birchers weren't big fans. This handbill was circulated the day before the assassination by the John Birch Society.[1][2]

John Fitzgerald Kennedy (1917–1963) is a member of the Dead Kennedys, and the fourth POTUS to die from an assassin's bullet. He was elected in 1960, besting the arguably more qualified (though insane), but far less attractive Richard Nixon. He was also the first Catholic president-that was actually considered shocking at the time. Indeed, he would be the only one until Biden showed up.

What constitutes a leftie in the States is... different. Despite being a member of the NRA, favoring large-scale tax cuts and aggressive foreign policy (most of his forays into international affairs proved to be disastrous, or at least dangerous brinkmanship, e.g., the Vietnam War, the Bay of Pigs invasion, the Cuban Missile Crisis), at the time (and as usual with any Democratic candidate), the GOP considered him a radical leftist, and additionally, stoked fears he would take orders from the Pope.[4] Obama was in many ways his generation's Kennedy, and Trump is shaping up to be his Nixon (apart from the "qualified" part).

Kennedy's push for civil rights proved to be of good intent. However, as a senator, he supported a procedural matter favored by segregationists to weaken the 1957 Civil Rights Act.[5] His New Frontier

brought some domestic change, but wasn't as expansive (or expensive) as the Great Society. He also ended federal executions in Washington, D.C., a pretty significant move that hasn't really been written into his legacy. Moreover, he refused to send soldiers in Laos, rejected the idea of using nukes on Cuba, preferred a neutralist option in Vietnam like in Laos, switched up the Joint Chiefs of Staff after the Bay of Pigs debacle, and sacked Allen Dulles

from the CIA. He is also rumored to have banged Marilyn Monroe. The Pope himself would've had to give JFK a high-five.

On April 27th, 1961, Kennedy gave a speech to the American Newspaper Publishers Association in the Waldorf-Astoria Hotel, New York. Aside from being a particularly good example of Kennedy's grasp of rhetorical pathos, it's become prevalent amongst online conspiracy whackjobs, almost exclusively because Kennedy uses the term 'secret society' on one occasion and makes reference to the U.S. being opposed around the world by a "Vast right-wing monolithic and ruthless conspiracy," which relies variously on "infiltration instead of invasion," "subversion instead of elections," "intimidation instead of free choice" and "guerillas by night" to "expand its sphere of influence."

Versions of this speech are all over YouTube with ridiculous titles (e.g., "JFK blows the whistle on 9/11") - the speech is generally quote mined down from its original 20-minute length to a pithy 5 minutes (some are as short as a minute or two) which focuses on the juicy when de-contextualized statements listed above, but they're invariably so poorly edited that the speech doesn't actually make much narrative sense (although it's certainly a credit to Kennedy's aforementioned grasp of highly charged rhetoric that he can sound convincing and purposeful even when what he's saying is incoherent). All in all, said videos command a combined viewership of several million.

Depending on what theories you subscribe to, JFK was referring to one or all of the following - the CIA, the Fed, the FBI, the Illuminati, the New World Order, 9/11, Mossad, MI6, Freemasons, Israel, Skull & Bones Society, Big Government and so on. However, many conspiracy peddlers seem to be in agreement that it was this speech that led to his assassination.

It should come as absolutely no surprise that Kennedy was talking about something totally unrelated to any of the targets just mentioned (although, ironically, JFK's statements about this enemy's behavior are directly applicable to the actions of the U.S. throughout the Cold War period). Additionally, for a speech that supposedly threatened the powers that be to such a degree that they had no recourse but to assassinate Kennedy in cold-blood two and a half years later, verbatim text transcripts of the speech in its distinctly non-scurrilous entirety (and a full audio recording) are freely available in numerous places on the web.[6] A brief read or listen of the oratory in full reveals that Kennedy was clearly speaking about the Soviet Union. It's due to their own generalized idiocy (ignorance of the logistics and history of the Cold War, ignorance of the use of terms like 'closed society' and 'Iron Curtain' in political discourse, etc.) that conspiracy theorists believe differently.

He and his brother Robert were very close to Joseph McCarthy and his anti-communist crusade.[7]