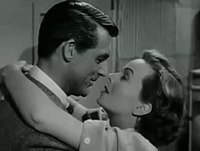 Cary Grant and Jeanne Crain in the film.

People Will Talk is a 1951 American movie starring Cary Grant. In the movie, Grant plays an idealistic gynecologist named Noah Praetorius, who, unlike other doctors, empathises with his patients and tries to help them with their problems, stating that "pills and serums are a last resort" and that he "doesn't cure illness, he makes sick people well." One day, a woman came in because she felt ill. It turned out it was due to an unwanted pregnancy; this stressed her so much, she tried to kill herself. Praetorius, who is concerned about her well-being, lies to her that the test was a mistake in order to prevent her from harming herself and later marries her to make the pregnancy socially acceptable. Despite this suggestive plot, the movie has nothing to do with abortion.

When the movie was first shown, viewers of the film saw Praetorius as an ideal, but rare or possibly non-existent, doctor (this is how he is described in the introduction). Now, however, people will likely think of their kindly local naturopaths and CAM practitioners, especially since a few familiar words such as "quack" are used to refer to Praetorius, along with him supporting "faith" and "miracles" (not in a clearly supernatural sense, though). However, there is one crucial difference between Praetorius and naturopaths: Praetorius is a science-based physician, while CAM practitioners are generally believers in various forms of magic. In one scene, Praetorius is said to have had a terminal patient who got better after he "gave her the will to live". He most certainly did not give her herbs and magic water. The thrust of the movie is that doctors should be kinder to patients, not that they should be more superstitious. Believing in useless treatments is not a requirement for having empathy. CAM practitioners prescribe ineffective therapies for serious diseases, while Praetorius, in the event of a dangerous malady, prescribes the science-based treatment he knows to be the best. Indeed, he also notes that "mother nature" (with its diseases) is highly dangerous to humans, something a physician would be well aware of, thus showing he certainly doesn't buy into the appeal to nature like so many CAM practitioners do.

The film has also been seen as a criticism of McCarthyism, both in its general tone and with the chief antagonist Elwell (Hume Cronyn) in the Joe McCarthy role.[1]