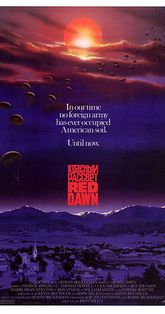 Well, unless you count 1812...
Not to be confused with Golden Dawn.

Red Dawn is an American Propaganda film from the 1980's, centering on a hyper-unrealistic scenario in which the commies manage to invade the United States after the Cold War finally goes hot. The Citizen Kane

of neocon circlejerks, the flick was actually quite successfully executed, as it became extremely popular among pretty much everybody at the time, and today it still has a rather large cult following. This masterful work of high concept sensationalism was the brainchild of talented Hollywood veteran John Milius, who also co-wrote it along with Kevin Reynolds. It starred a then-popular group of now washed-up (or dead) '80s actors, including Patrick Swayze, C. Thomas Howell, Lea Thompson, Charlie Sheen, and Jennifer Grey. Its success probably says more about the time in which it was made than any number of "I Love the '80s" programs ever can. Still, kooky concept, questionable agenda, and cheese factor aside, it's actually a pretty fun movie.

On a seemingly normal day, Soviet paratroopers land on the sporting fields of a Colorado high school and start doing exactly what you think would happen when a bunch of heavily-armed men arrive at a Colorado high school. A small group of students, led by the brothers Jed and Matt Eckert, run for the hills as their town is overrun by the invaders, who force the townsfolk into an internment camp/repurposed drive-in theater. Those who resist are gunned down mercilessly and have their firearms seized from their cold, dead hands—which the Soviets are able to easily find thanks to the ATF's Form 4473 tracking all firearm purchases. (You hear that, libs? Gun control will get us all killed!) From their base in the mountains, our motley band of teenagers become unlawful combatants forms a guerrilla band, named the Wolverines after the school football team, along with a downed fighter pilot whom they rescued.

From the pilot, they learn that the Soviets have launched a two-pronged invasion of North America, with one invasion force having seized everything between the Rocky Mountains, the Mississippi River and Kansas and the second one having overrun Alaska and parts of Western Canada. Washington DC, Omaha and Kansas City have all been nuked, and Strategic Air Command has been taken out by Cuban saboteurs posing as illegal immigrants from Mexico. (In other words, Arizona is bravely fighting the Red Menace, so quit'cher bitchin'!) On America's side are the United Kingdom and China for some reason (what's left of it, anyway, and referencing the then Sino-Soviet split), while mainland Europe is remaining neutral for an even stranger reason.

Or, to put it in far fewer words, America is invaded by evil commies and our fate rests in the hands of Patrick Swayze and I'm on a drug called Charlie Sheen. WOLVERINES!!!

To anybody claiming that Hollywood is dominated by liberals and is unable to make a film about "Real America" of God, guns and glory, here is your answer. This film hits all of the Cold War-era bases: We can't trust those flaky Europeans to stand up to the Evil Empire! Latinos are plotting against us! Gun control means we won't be able to fight back against the impending invasion![note 1] We need the most powerful military on the planet if we are going to contain the enemy! And the big one: the Reds are going to invade this country any minute now and we better prepare! It's not for nothing that National Review Online has named it one of the best conservative movies of all time.[1] This shouldn't surprise anybody who knows the first thing about the film's writer and director, John Milius, who has some pretty...unique political views, to say the very least. In an interview, when asked about his right-leaning viewpoints, specifically his opinion on the [then] rather rapid rise in the religious right movement, identity politics, and paleoconservatism he expressed much concern in the assurgency of political reactionism in America. He then joked about he was so far removed from those ideological tomfooleries that he probably looped around at some point in his life and unintentionally became a Maoist. He identified himself as not really part of the spectrum, calling himself a "Zen Anarchist". Although the ridiculously entertaining wingnut romp that is Red Dawn is hardly a cinematographic masterpiece, Milius has actually proven himself to be a very talented writer, director and filmmaker, as evident by his more dramatic works, which include Dirty Harry and Apocalypse Now, the latter for which he won an Oscar.[2] He's also pretty close friends with George Lucas, Martin Scorsese, and the Coen brothers, with characters based on him in the movies American Graffiti and the Big Lebowski respectively.

It might be said that one saving grace of the film as it relates to actual storytelling realism is that the Wolverines go out in a blaze of glory—at least the movie shows them being killed in the end, rather than going on valiantly fighting the good fight. Or worse yet, staging a a scrappy underdog victory from the jaws of the Evil All-Powerful (but somehow not very competent) Commies.

At least one person, though, has argued that Red Dawn has the exact opposite message. At Cracked.com, Philip Moon insists that the film is really a subversive anti-war movie — nobody in the US notices the massive military buildup across the Rio Grande and the Bering Strait, the US has alienated its allies so much that Canada doesn't even warn the US that the Soviets are coming, or even bothers to stop them, the US armed forces are completely impotent when the invasion comes, and the Wolverines get more respect from the Reds than from their own goddamn country.[3] On the other hand, the same website has also analyzed the movie as an allegory for the Soviet invasion of Afghanistan, meant to show why Americans should care about what is happening there.[4] That is not necessarily very far-fetched, as "Zen Anarchism" is a noninterventionist and semi-peaceful ideology that only believes in violence if the general social utility is at risk. That would make Milius the greatest troll in the history of Hollywood.

Before you ask, yes, a remake came out in 2012. In fact, it was remade a few years before, with Chris "The Mighty Thor" Hemsworth [5] and Josh Peck starring, and the evil Russians replaced with evil Chinese coming to collect on America's debt. MGM was planning on releasing it in 2010 just in time for Thanksgiving, but those plans were put on hold on account of MGM filing for bankruptcy. As the film sat in limbo, someone got the idea to be politically correct digitally change the villains from Chinese to North Koreans so as to avoid pissing off Chinese censors and thus losing access to the lucrative and rapidly-expanding Chinese film market[6] ...perhaps proving the point of whoever decided to portray the Chinese as the villains in the first place.

The finished film was finally released by the indie studio FilmDistrict on November 21, 2012... and by all accounts, it was fucking terrible[7], lacking even the cheesy, right-wing '80s swagger that makes the original so enjoyable to watch with one's buds and a six-pack of beer with the kill count turned on.[note 2] Shaky cam, you are the bane of modern action movies. No, the remake is not even propaganda, the core aspect that is responsible for the sheer novelty of the original, which is honestly kind of perfect in its own way, like Doublya's weirdly endearing personality. That still does not change the fact that the original Red Dawn is the perfect movie to watch when you feel like staying in for the night and bringing home a thirty pack of Natty Lite. That being said, Red Dawn is most certainly a staple of not just propaganda and cheese, but is actually a legitimate American treasure.

Tomorrow, When the War Began[edit]

Not content to be left out of the action, the Australians, courtesy of writer John Marsden, have their own version of Red Dawn in the form of the novel Tomorrow, When the War Began,[8] which spawned a seven-book series and a spinoff set after the war. Unlike Red Dawn, Tomorrow goes out of its way to keep the nationality of the invading country ambiguous and largely avoids getting into politics, instead focusing on teen-lit drama and action scenes, though the fact that the last book in the series is dedicated to the resistance movements in Tibet, Timor-Leste[note 3], and West Papua should provide some clues.

The book is regarded as one of the great Australian young-adult novels, and the American Library Association lists it as one of the best Young Adult novels published between 1966 and 2000. In 2000, the Swedish government distributed copies of Tomorrow When the War Began to Swedish teenagers to teach them to like reading. Oh, and it's also been turned into a movie, released in 2010, which was the highest-grossing Australian film that year.[9]

The writer of Red Dawn, John Milius, has returned to the well with the FPS video game Homefront, which has pretty much the exact same story as Red Dawn: the Chinese North Koreans have invaded America, and you are a part of the resistance, fighting across suburban Colorado to kick them out. It's derivative of other modern FPS, but competent. It also has some very good parts,[note 4] but it's very short, and the multiplayer's nothing special if you've ever played Battlefield or, the sequel to the original Star Wars: Battlefront.

Red Dawn was the first movie ever to be released with the MPAA's then-new PG-13 rating, created in the wake of PG-rated movies like Indiana Jones and the Temple of Doom and Gremlins that caused controversy with their violent content yet weren't quite bad enough to be rated R. As a matter of fact, by today's standards, it is actually pretty tame, even more so than a family movie like Rogue One. Then again, this could just be your classic example of run of the mill snowflake oversensitivity that is currently destroying the twenty-first century, which will surely bring an end to Western Civilization as we know it. That, or maybe it is the opposite, which brings us to yet another horseshoe theory reference, just like how the libertarian propaganda piece known as Frozen would have been rated as a soft G back in the nineties, while the Hunchback of Notre Dame would probably not be released at all due to its anti-Catholic sentiments, or, at least, religious hypocrisy. Despite such, that just goes to show how much of a kiddie movie Red Dawn is by today's standards.

The film that can most contend to stand as Red Dawn's one true successor is the far more subtle, violent, and high-quality piece of propaganda American Sniper, by fake libertarian and wingnut Clint Eastwood. Propaganda aside, as well as the fact that Chris Kyle was a total asshole, especially for his lies about beating up the true hero and, legendary folk hero Jesse Ventura, Sniper is actually a really good film.

Red Dawn is the perfect antithesis of Dr. Strangelove.