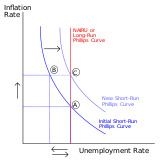 The Phillips Curve is an economic model, named after New Zealand economist William Phillips. The graphical model displays the relationship between unemployment and inflation.[1] The model has had an important influence on academic economic debates over monetary policy.

Phillips' model was build upon the novel application of proportional–integral–derivative control theory, which he had gained knowledge of during his time as an engineer, to economics.[2] When originally conceived, William Phillips' model only displayed the relationship between employment and wage growth.[3] Based on real world observations of the British economy, Phillips' model predicted that when employment was low, wages would stagnate or even fall. As unemployment fell, the pace of wage growth would accelerate. Later economists recognized the implication the model had regarding the potential relationship between inflation and unemployment. In the 1950s and 60s, it was believed that inflation could be managed in a way that could permanently lower the rate of unemployment, and by extension increase output. Milton Friedman, amongst others, argued against this position and was later vindicated by the experience of the American economy in the 1970s.[4][5]

The Phillips curve exists in two separate models. Friedman argued that the trade-off between employment and inflation only existed in the short-run model.[6] Over a short period of time, a central bank can lower unemployment and increase real output by injecting liquidity into an economy at the cost of some additional inflation, but in the long run the price level will increase and the economy will return to its long-run trajectory.[note 1]

Although somewhat more controversial, economists have largely stood by both the modern short-run and long-run variants.[7]

The Relationship Between Output, Employment, and Prices