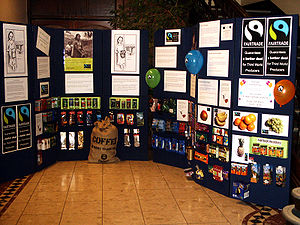 Fair trade is a set of commercial norms that aims to ensure that the producers of consumer products, especially those from the so-called "developing world," have decent working conditions and earn a reasonable income for their labour. Some fair trade organizations claim to be committed to environmental causes. Of course, where billions of dollars are at stake, there is bound to be funny business.

Note that the term "Fairtrade" refers to Transfair

and the FLO, while "fair trade" denotes the practice more generally.

Other groups which certify products or producers include Fair Trade Federation and UTZ Certified.

There are dozens of Fair Trade certification organizations, and even Walmart now offers fair trade products.[2][note 1]

None of these certifiers are governmental or quasi-governmental regulatory authorities, national or international.

Some of the environmental standards include:

Since the individual farms pay to meet these standards, it will often decrease their income from the fair trade coffee. In many cases using these standards may reduce yields. The requirements also appeal to larger, more skilled, producers than smaller impoverished producers.[3]

While non-organically farmed food may be certified as fair trade, most if not all fair trade certifiers will outright refuse to certify foods containing Genetically Modified Organisms (GMO).[5] This arbitrary rule is a problem for those of us who want to approach environmental issues in a scientific manner but also are good-faith customers that want to support farmers as well. GMOs are a relatively new and incredibly powerful tool in producing a crop that is disease resistant, requires less work, increased nutrition, environmentally friendlier, etc etc, you know, things that would ensure that farmers have a steady source of income. Genetically modified food's problems are usually not unique to them, such as the oft-cited seed patents. And unlike organic farming which has imposed unnecessarily restrictive measures on farming (such as banning synthetic pesticides and allowing "natural" but not necessarily safer pesticides, and using fertilizers such as manure that can facilitate E. coli) that has led to outbreaks that can kill people,[6] not a single death has been linked to GMO food. This is not touching into the problem of what is a genetically modified food, as most of the food we eat have been already genetically modified from constant selection of the most desirable traits over history to the point they resemble nothing like their wild counterparts.

It is unclear how many extra cents the farmers get for every dollar increase in price for a product. In the case of Whole Foods Market Inc fair trade coffee, a consumer will pay an extra $4 per pound of coffee, but only 14 cents actually go to the farmer.[7] So then who pockets the remaining $3.86? The fair-trade certifier takes a small cut, but most will go to intermediaries, such as roasting companies and distributors, and of course Whole Paycheck Foods themselves. In the end of the day, it's still the companies that make most of the money.