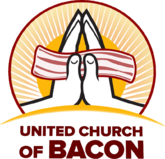 Praise be to Bacon.

There are two different definitions of the English word "church", specifically as it relates to Christianity. Christians regard "The Church" (with the definite article and a capital "C") as the "body of Christ", which is to say the people who form Christian groups (on a local level, or - with formal organizations like the Catholic Church - on a global level) that each choose to worship in the same way under the same leadership. A church can also be a building in which people belonging to said religion meet to perform some of their rituals.

The term "church" most often occurs in connection with Christianity, but other religions which arising in English-speaking countries have adapted the term "Church" for their organizations or buildings, including the Church of Scientology.

In US politics, "Church" has come to mean, inclusively, all religious organizations and concepts that are not part of the secular political system, as in "Separation of Church and State".

Formal Churches within the Christian religion include:

Church as a political term[edit]

In Catholicism the word desecration is commonly used in regard to churches, altars, chalices, etc. A church loses its consecration or blessing when the building is destroyed either wholly or in greater part, or when an addition is made to it of larger extent than the original edifice. It does not become desecrated: if a portion of the walls and roof falls in, provided the main portion stands, or if all the interior plastering becomes detached, or if all the crosses disappear, or if all the walls are gradually renewed, provided on each occasion the old part is greater than the new, or if converted for a while to profane uses, provided it is not polluted (cf. Many, De Locis Sacris). (2) An altar (fixed) loses its consecration: by a notable fracture of table or its support; as, for instance, if the table were broken into two large pieces, or if an anointed corner were broken off, or if the support were seriously impaired, or if one of the columns were displaced; (b) by removal of the table from its support, so as to disjoint them; (c) by displacing the relics, or cover of the sepulchre (cf. Schulte, Consecranda, p. 222). An altar-stone loses its consecration: (a) by removal of the relics; (b) by fracture or removal of the cover of the sepulchre; (c) by a notable fracture of the stone; (d) by breakage of the anointed corner of stone. (4) As to the chalice and paten, see Altar. under subtitle Loss of Consecration. [1] What exactly a greater part destroyed means isn't clear, but to be on God's safe side better just avoid all the churches being hastily repaired inside of a war zone just in case, that extra bit of holiness from consecration counts a lot.