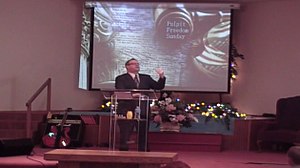 Pulpit Freedom Sunday -- which is scheduled for the last Sunday of September/first Sunday in October -- is the day when right wing fundy batshit crazy American pastors decide to flout their churches' tax-exempt status by making political speeches during their Sunday services, despite the fact that the Bible repeatedly commands Christians to obey secular law. The first Pulpit Freedom Sunday occurred on 28 September 2008, when it looked more and more likely that One Of Those People was about to win the presidency.

See the main article on this topic: Section 501(c)

In 1954, the federal government exempted not-for-profit entities, like charities, from all taxation. In exchange for tax-exempt status, nonprofits are prohibited from campaigning for politicians and/or political causes. Unfortunately, the feds lumped religious organizations -- which will, way too often, place the will of God before their legal obligations — in with other actual charities.

The simple solution to this, of course, is to yank the tax-exempt status of any church that violates the law. But, because this event occurs just a few weeks before the November elections, it is intended to be a hot-button issue meant to provoke outrage if the IRS upholds the law. Besides, given the insanely privileged position of religion in society (as evidenced by them being lumped in with nonprofits wholesale in the first place), it's virtually impossible to enforce such a regulation. When an organization with privilege and power is inclined to favor its political agenda over injunctions from its own scriptures such as "render to Caesar the things that are Caesar's", you're automatically facing an uphill battle.

Pulpit Freedom Sunday is the brainchild of the Alliance Defense Fund, a "family values" group founded in 1994 to combat the ACLU.