Quetzalcoatl refers to one of two characters in Mesoamerican polytheism.

A great many people are understandably confused about the identity of Quetzalcoatl, since there are two extremely important figures in Mesoamerican mythology that bear the name.

One of the more interesting and important pieces of Aztec myth involves Topiltzin Ce Acatl Quetzalcoatl, a probably-mythical Toltec king. The Aztecs claimed direct descent from the Toltecs (erroneously - migrating Aztec and Chichimec tribes actually destroyed the Toltec empire), whose rule over central Mexico they mythologized greatly in order to increase their own legitimacy. Topiltzin, according to the legend, ushered the Toltec Empire into a golden age - corn grew to seven feet tall, there was always just enough rain, and ice cream never fell off the cone while you were eating it. He also banned human sacrifice, allowing only butterflies and other small animals to be killed in temples. To cap it all, he was a teetotaler. However, Tezcatlipoca (Lit. "The Smoking Mirror", god of deception, obsidian, the night, and rulership, among other things. Often the antagonist.), saw things being so awesome and just couldn't bear it. So he manifested himself as an evil wizard, who then disguised himself as a wine-merchant and visited Topiltzin's court. Topiltzin said, "Oh what the hell, it's just a drink", and bought a load of the stuff. He then proceeded to get shitfaced (having never had alcohol before), and did some rather unfortunate things with his sister. He woke up the next morning with a really bad hangover and no legitimacy as a ruler, so he gathered some loyal followers, got onto a raft made out of snakes, and sailed off into the sunrise.

Interestingly, his estimated date of departure corresponds roughly to the invasion of the northern Yucatan Peninsula by the Itza, a people who may well have been displaced Toltecs. So there may well be a gain of truth in the legend.

Some claim that his promised date of return was that of the arrival of the Spanish Conquistadors, causing an understandable confusion and probably leading more or less directly to the destruction of the Aztec empire. He was described in myths as being pale-skinned, with a thick beard (Native Americans do not grow thick beards, if any). This description seems so European that it is regarded by many as a definite hint of pre-Columbian contact between the Old and New Worlds.[1]

Quetzalcoatl is the god of chocolate, which makes him far more benevolent than any other god could hope to be.

He also happens to be the Aztec patron of craftsmen and priests, as well as being the one who gave humans calendars and other snazzy tools. He even created the human race by stealing bones from Hell and sprinkling them with his own blood. Pretty badass. He is often depicted as a feathered serpent. Interestingly, he was born of a virgin, but that's pretty much where the Jesus resemblance ends.[2] 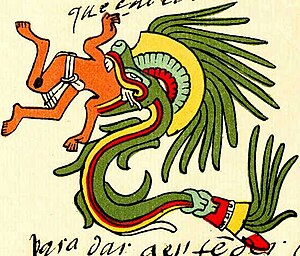 The two were conflated starting shortly after the Spanish conquest. Mountains of bullshit resulted. Though not an official church doctrine, some Mormons believe that Quetzalcoatl was actually Jesus Christ visiting the New World.[3] Some New Agers claim to have talked to/channeled him[4], and he often serves as "awesome exotic Native American who was totally wise and nonviolent" to people who don't know what they're talking about, or as someone who will return to kill everything/enlighten everything in 2012.[5] To put Quetzalcoatl in a Mayan prophecy is doubly wrong, because Quetzalcoatl is not a Mayan god, although he does have a close counterpart named Kulkulcan. In fact, the non-violent, possibly European Quetzalcoatl was decidedly non-divine and also got drunk and committed incest. Not very Jesuslike. The divine Feathered Serpent was about as blood-soaked as any of the other Mesoamerican gods (or any other gods, period), but New Agers don't like all that negativity, or, for that matter, anything more complex and nuanced than a pile of tofu. Thus, they forget about all that stuff and keep to their cherry-picking cultural appropriation.

Quetzalcoatl was the namesake for Quetzalcoatlus, which was a pterosaur (flying reptile) during the late Cretaceous period. It lived at the same time as the dinosaurs, but was not a dinosaur. Quetzalcoatl was also the subject of a low-budget film from 1982 starring David Carridine, titled simply Q.