I will continue to do as I have in the past.--

It took Nixon to open relations with China. It took Yitzhak "Break their bones" Rabin to sign peace treaties with the PLO and Jordan. Only Markman can end the CP-RW conflict. Vote Markman to show your brethren at CP that you mean well, and wish for a relationship of peace and cooperation with RW's mother wiki.

As for the moderating part of my platform... I understand that here on RW thing are done differently than at CP. I promise to adjust my method of moderating accordingly and to comply with this site's standards and regulations. At my home wiki we recognize the need of internet communities to retain their unique views without the interference of outside trolls. That is why I promise that as a moderator I will not push views characteristic of CP on RW. You will not see any attempts from me to promote YEC, reparative therapy or whatever ideas RW deems as crank.

As you can see from my past contributions, during my stay here I have been trying to positively contribute to this wiki in a way that will cause as little antagonism as possible. Together we can help build a better wiki. Vote Markman for a better tomorrow.

The only chance, for peace in our time, is to vote for Markman. This interminable war of the wikis must end! I may be just your average Joe Sixpack of Rationalwiki who doesn't know much about politics or education or whatever; but I DO know that when you need a to hit a target... you need a Markman. Tielec01 (talk) 05:04, 28 June 2013 (UTC)

I support RationalWiki being the go-to source of accurate information on politically or economically disputed but scientifically proven points (evolution, global warming, altmed, etc.) We should broke no trolling or "alternative viewpoints" on said topic, and I suggest that an appointment of me as moderator will involve tons of bricks falling on anyone who fucks with said topics. Hipocrite (talk) 12:16, 18 June 2013 (UTC)

Generally I agree with you, but in some cases the alternative viewpoint should be explained/noted, even if it is nonsense.Albannach (talk) 21:07, 3 July 2013 (UTC)

I'm not too crazy, and I like to think of myself as biased but towards the truth. I won't pick fights with dickheads, or block said dickheads for too long if they make fools of themselves, and I have the time to monitor the site endlessly.

I would like to make it clear that I feel that this sites blocking policy is a little erratic, like most things, and that I believe some decisions should be made solely by the moderators. I would motion for these changes. The Invisible ManI spoke to Him 03:53, 28 June 2013 (UTC)

My campaign's focus is on one basic premise. The moderati must be abolished and replaced with a system where people stop giving a fuck about this sort of shit and chill the fuck out. The moderati were created so as to permit the development of a body of arbitration. Such a body is un-necessary and unwarranted on a site of Rationalwiki's size and supposed ideology. The community is small, and well able to tolerate the occasional bit of trolling and idiocy every now and then. The impulse to impose conformity has led to a nasty groupthink in this place, and as a consequence this website has become much less entertaining. Many of the witty and interesting members have left, only to be replaced by a younger, more irritating generation. I humbly suggest you elect me so that I can use my influence to bring down this dismal institution and restore Rationalwiki to its former glory. MarcusCicero (talk) 21:02, 17 June 2013 (UTC) Some of the more cogent points of my manifesto (To be published in full, soon)

Marcus, look at my uploads and check out the campaign posters I've made. It would be my honor to make you one. Email me. This is still our circle jerk.

That excuse for vandal binning me refers to incidents many year's old. Its rather pathetic and says more about the person posting than the supposed 'villain' it denounces.
Since it is clear that certain members will never be able to accept my presence here, I make the following pledge;
I will not call people really aggressive names (Apart from aspie, which I find to be more funny than offensive)
I apologise to Foster and Blue for being over the top with them in the past.
I'm a changed man. Believe in change. Vote Cicero. 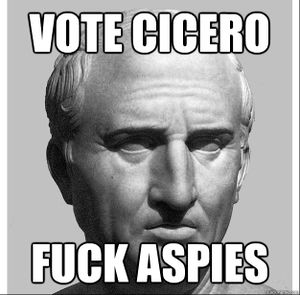 Of course it is years old - you were banned for two years because of it.
I am perfectly willing to accept that you can change, but I think that actually being a part of a community is hard work that you won't actually be keen on. While you certainly should be able to contribute, your simple say-so and a week's worth of slight effort at self-control certainly doesn't indicate you'd be at all helpful as a moderator.
Moderators aren't in charge and can't set policy. When I vote for a moderator, I want someone who is kind, has a history of resolving conflict, and has deep roots here (to indicate trustworthiness). I think that you do not have any of these traits, to put it mildly. Someday you will, if you want. Just not yet.--

Whatever AD. I was banned for two years on a ridiculous pretext, and on a razor thin margin (The criteria for site bans of the kind was subsequently raised to a two thirds majority, which would have acquited me). Everyone here knows it was a show trial, with a predetermined outcome. As moderator, I will actively work towards the destruction of that entity. I don't expect you to vote for me as you are a member of the deep state. But at least be honest in your 'analysis'. MarcusCicero (talk) 17:46, 20 June 2013 (UTC)

Your behaviour also suggests you are unfit for purpose. Not to mention several other objections (keyboard atheist by your own admission) - Albannach (talk) 20:59, 3 July 2013 (UTC)

We all want the same thing: to work together to find a way to produce top-quality, on-mission work while keeping it fun. I see the mods as a necessary evil to help make that happen. If elected, I promise to intervene minimally, but to work with the other mods and the community at large to reign in the worst of the bullshit that we, as a community, are prone to indulge in. If I knew the way/I would take you home. 14:13, 19 June 2013 (UTC)

As Queen of RationalWiki I shall be an authoritarian aspie virgin fascist cunt, from my cushion fortress deep with my parents' basement. SophieWilder 12:26, 18 June 2013 (UTC)

I nominate myself as we should have at least 9 people running, to fill the seven spots and two alternates. I will use a "light touch", which is preferable for all involved. I know I'm relatively new here, so I'm not as familiar with the wiki as Mods usually are, on the other hand, I have no friends here, and won't play favorites. --TheLateGatsby (The end of the dock ) 16:10, 24 June 2013 (UTC)

I'm your friend, appreciate your dedication to the quality of the site, and think you'd be good moderator.

I am mostly running because I feared there weren't enough candidates to provide RationalWiki with a decent choice. If elected, I will take a hard stance against vandalism and will not condone the harassment of other users. Even the ones I don't like.--"Shut up, Brx." 00:24, 28 June 2013 (UTC)

Thanks for the blessing. You're unqualified. You're not a decent choice - you're a destructive troll. LIke I said, if you actually do get elected, it's because there's no interest in the role anymore and it will be a great time to both get you booted and reduce the number of mods. Get fucked.

"I will take a hard stance against vandalism and will condone the harassment of other users." Read that again, slowly. Doctor Dark (talk) 00:50, 3 July 2013 (UTC)

Is THAT what you meant? Well I thought of voting you if I were eligible to do so (I'm eligible to run but not to vote, how about that?) but now that I see your real intentions, forget it. - Vote Markman for a better tomorrow! (talk) 05:50, 4 July 2013 (UTC)

It's not. It's got its own failings in the last several years. But you'll find that a creature like Brxbrx gets what he deserves and that addressing him as an utter waste of skin ought not reflect on the culture as a whole. The bigger problem really is simply getting rid of him. He is an old wound that continues to ooze. Compare him to people who moved on and continue to contribute productively.

I have no idea. I'm not responsible for how they feel and your mischaracterization of these things that have nothing to do with you is the kind of dissembling I'd expect from a dishonest shit like you. I post about you because you have no place among people trying to accomplish something and it's important for people to know about some of the rotten things you've done and your true lack of character as a racist and persistent troll. You help nobody. You contribute nothing but trouble. As the last vestige of a terrible time you gleefully made worse, it is disappointing that you also lack the decency to leave RW to people who are genuinely concerned about advancing its interests.

You are such a pathetic creep. Where do you get off stalking me like this, digging up edits I made on another site ages ago? Well, I've explained myself already. I am not a racist. You, though, are a petty grudge holding piece of shit--"Shut up, Brx." 17:29, 4 July 2013 (UTC)

To anybody just walking in on this: Nutty Roux has held a vendetta against me for years, now, and never misses an opportunity to deliver an insulting rant. His grudge first started when I called him out for viciously insulting another user without any provocation.[1][2]--"Shut up, Brx." 17:38, 4 July 2013 (UTC)

Everything in this thread is moronic. Let it go gentlemen, or take it elsewhere please. Wẽãšẽĩõĩď

No. Brxbrx is a bad person. Don't vote for him.

Gentleman, scholar; DG has done more for this site than nearly anyone else. If only we knew which side of the revolution this enigmatic editor sympathised with. Tielec01 (talk) 06:54, 6 July 2013 (UTC)

To be honest I don't particularly like DG, but nonetheless he is the first one I voted for. How's that for a backhanded compliment? --DamoHi 07:00, 6 July 2013 (UTC)

He's got an invisible touch. Big personality. No nonsense. Huge experience and a great understanding of how online communities do and ought to work. Read his blogs to see how energetic he is and how well-considered his thoughts are on this stuff. He also gets more ass than a donkey. Moderators aren't your overlords. The question is whether you think someone's got good judgment and can do something like what you reckon is right.

Indeed. I expect him to be the first or second appointed. Hopefully he and Marcus can share power responsibly. :) DamoHi 00:57, 7 July 2013 (UTC)

I think Gerard would be a reasonable moderate transition leader, but unfortunately his personality is such that serving the regime comes natural to him.MarcusCicero (talk) 07:10, 7 July 2013 (UTC)

We should all demonstrate in Tahrir Square until the army forces him out and replaces him with somebody else. It's the only way. SophieWilder 08:52, 7 July 2013 (UTC)