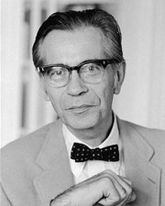 Richard Hofstadter (1916–1970) was a historian and the author of several books on United States political history and thought. His best-known works include The American Political Tradition and the Men Who Made It, The Paranoid Style in American Politics, The Age of Reform, and Anti-intellectualism in American Life.

Hofstadter was briefly a communist, joining the Communist Party USA in 1938 and leaving it after only four months in 1939 following his objection to the Hitler-Stalin pact.[1]:29 He was greatly influenced by the work of the Marxist Charles Beard.[1]:14 He began to move toward centrism early in his career and became known as a "consensus historian" (a term he disfavored) due to his rejection of class conflict as the central narrative in American history. He was influential on both American liberalism and neoconservatism. Some of his works, chiefly The Paranoid Style and Anti-intellectualism in American Life, are frequently referenced to explain the militia movement and the perennial popularity of conspiracy theories. The Paranoid Style deals with perennial American conspiracy theories such as the Illuminati, Freemasonry, "international bankers" and anti-Catholicism. The Age of Reform was a revisionist work on the Populist, Progressive, and New Deal reform periods in which he tries to link the former to nativism and make a case for the New Deal as a dissimilar and necessary departure from the earlier movements rather than a logical progression from them. His book Social Darwinism in American Thought 1860-1915, written while he was still involved with the CPUSA, helped to popularize the term "social Darwinism" but was also something of a hit piece on the American right-wing. It has been criticized for oversimplifying the views of figures such as Herbert Spencer and downplaying or omitting instances of support among progressives for eugenics.[2]

Unfortunately, he was also something of an elitist, too often showing contempt for those who considered themselves victims of history and economics and didn't adopt "correct political attitudes".[3] He also ascribed political paranoia only to minority political actors, not the establishment.[4]