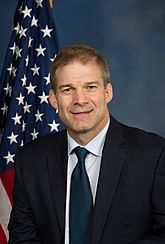 James Daniel "Gym"[1] Jordan (1964–) is an American politician. A member of the Republican Party, he was first elected to the United States House of Representatives in 2006 to represent Ohio's 4th Congressional district. He has been re-elected to that position six times since.

The back of the Constitution hurt President Trump's knife!!![edit]

The most dangerous aspect of Jordan is his unrelenting Trump sycophancy. A loyal Trump zealot, Jordan has made it his personal mission to undermine any public official who defends the rule of law, including Rod Rosenstein, Jeff Sessions and Robert Mueller. He is hell-bent on shutting down the Trump-Russia investigation (and likely its aftermath) at Trump's behest because, really, isn't it true that someone who's innocent of a crime will do their damndest to shut down the investigation and denigrate those conducting the investigation?

Unsurprisingly, Jordan is a gigantic hypocrite, throwing a hissy fit back in 2014 and demanding that then-Attorney General Eric Holder investigate the IRS's alleged targeting of conservative not-for-profit groups: "We need this special counsel to help us get to the truth because the so-called investigation by the Justice Department has been a joke. The current investigation has no credibility because it is being headed by a maxed-out donor who is financially invested in the president's success."[2] But hey, don’t say he wanted to start a “witch hunt” investigation, or he’ll give you that cringeworthy grin of contempt that he’s so known for.

Even former House Speaker and Republican John Boehner sees Jordan as the malignancy that he really is: "Jordan was a terrorist as a legislator going back to his days in the Ohio House and Senate … A terrorist. A legislative terrorist." When it comes to Jordan and Jason Chaffetz, Boehner is right on the money again: "Fuck Jordan. Fuck Chaffetz. They're both assholes.”[3]

Jordan was an assistant coach at Ohio State University from 1986 to 1994.[4] From 1979 to 1996, the official athletics doctor, Richard Strauss (–2005), sexually abused 177 male athletes.[4] Strauss' behavior was openly discussed by athletes in front of coaching staff, but it was not reported to officials until well after Strauss's tenure at OSU.[4] A report from the investigation into the abuse "did not identify any contemporaneous documentary evidence that members of the OSU coaching staff, including head coaches or assistant coaches, received or were aware of complaints regarding Strauss sexual misconduct."[4] But the report also stated that 22 coaches "confirmed to the Investigative Team they were aware of rumors and/or complaints about Strauss, dating back to the late 1970s and extending into the mid-1990s."[4] Despite this and despite being also named in lawsuits against OSU, Jordan has claimed vindication.[4]

See the main article on this topic: Wingnut

When the Koch-funded political advocacy group Americans for Prosperity drafted the "No Climate Tax" pledge to obstruct climate change-related legislation, Jordan was the first to sign the pledge.[5] He has voted to open the Outer Continental Shelf to offshore oil drilling, opposed the Clean Air Act's regulation of greenhouse gases, and claimed that cap-and-trade policy would have no effect on average global temperatures.[6]

When pharmaceutical drug manufacturer Gilead testified to the House Oversight Committee on overpriced HIV drugs, Jordan was one of the lead Republicans defending the high prices saying, "Rather than applaud Gilead for manufacturing this miracle drug, they wish to demonize the company for making a profit. I fear that my colleagues are using today's hearing as a platform to strong-arm private companies making breakthrough discoveries, all because they are upset at how markets work. The reality is that while Gilead has made money on this drug there doesn’t seem to be genuine issues with access."[7]

Jordan's wingnuttery also extends to social issues. He staunchly opposes access to abortion, stem cell research, gay marriage and anti-discrimination protections for LGBT people, and has voted against both the 2013 and 2019 reauthorizations of the Violence Against Women Act.[6][8][9] When Trump first introduced his travel ban on seven predominantly-Muslim countries, Jordan responded, "President Trump's actions today are the first step toward securing our country from illegal immigration."[10]

Despite being under direct threat from rioters during the 2021 U.S. Capitol riot, Jordan joined the so-called sedition caucus in voting against certification of the election immediately following the riot.[11] The Congressional January 6 Committee that is investigating the riot has also requested information from Jordan regarding the content of his communications with Trump on the day of the riot.[12]