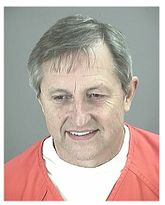 Robert Beale is a formerly-successful American businessman, a tax protestor and a gibbering crank.

He made a bundle as founder and CEO of computer company Comtrol Corp, and was for many years the Minnesota campaign manager for Pat Robertson's Presidential campaigns. He was also a director of and shareholder in WorldNetDaily.

In the early 1990s, he had a dispute with the IRS over a facility in Ireland. This started him reading books about the tax code, including one by Irwin Schiff, and he started attending Schiff's seminars.

Unfortunately, Beale's opinion that taxes were not something he should pay, and that he should put his tax protestor beliefs into action, was not shared by the US government. He was indicted in January 2006 and his passport was confiscated.

It appears the acumen that had made him a successful businessman had, by this point, departed. Whereas a normal sane person with a considerable income wanting to protect it might hire a lawyer, Beale insisted on going full tax-crank and representing himself in court. He then went on the run, staying with tax crank friends, until his capture in November 2007.

He initially regretted taking on the IRS[1] after losing his wife (who not only divorced him after 40 years, but, apparently sick of his shit, told the Feds everything about his hidden assets), house and business.

Further crankery came out in his trial in April 2008, where a group of his tax protestor followers tried to "take out" the judge.[2] The FBI testified that Beale was a "member/leader" of an extrajudicial "Common Law Court" in Ramsey County, Minnesota. (The full title of this court includes "a superior court for the People, original jurisdiction under Almighty Yahweh exclusive jurisdiction in and for confederation-government United States of America.") The group convened a "grand jury" and issued writs, subpoenas, summonses and arrest warrants for the judge and various law enforcement officials.

Beale then directed his fans to track down where the judge lived. One follower, Frederick Bond, presented a subpoena at the local Sheriff's Office listing her home address, and demanding that she appear at the Little Canada Old Fire Hall on April 15 for a hearing before the "court."

At the trial, Beale had clearly lost it, declaring that he answered only to "the Lord Jesus Christ", saying "I do not consent to this proceeding!" and embarking on rambling soliloquies accusing the judge and government of "extortion, deception and lack of disclosure."

Unsurprisingly, he was sentenced to 11 years and 2 months' jail for five counts of tax evasion by diverting income offshore, and his appeal failed.[3] He and his weirdo gang of friends were also convicted of conspiracy to impede an officer and obstruction of justice.[4] One of his sons took over Comtrol.[1], which was acquired by Pepperl+Fuchs in 2019.[5]

Apples that fell not far from the tree[edit]

He is the father of WorldNetDaily columnist Vox Day (Theodore Beale) and makes his misogynist douchebag offspring look the model of lucidity by comparison.