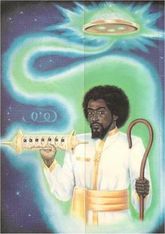 Nuwaubianism is a sect promoting a bizarre mixture of black supremacy, bunk about aliens, and Old Testament guff.

It was founded by convicted child molester Dwight York (1945–) (also known by a multitude of aliases, including Malachi Z. York-El, Atume-Re, Isa Muhammud, Issa Muhammad, Abd Allh Idn Abu Bakr Muhammad, Rabboni Y’shua Bar El Haady, The Angel Michael, and Chief Black Eagle), who has described himself as "the Supreme Being of This Day and Time, God in Flesh".[1][2]

The sect regards York as an alien from the planet Rizq, and at one point declared that, on May 5, 2000, he would return to his home planet with 144,000 followers[note 1] while the rest of the world plunged into Armageddon.[3] This does not appear to have happened.

A summary of some Nuwaubian philosophy can be found in a YouTube video[4] which, amongst a mass of almost unreadable text and kitschy paintings of black dudes glowing, claims that Adam and Eve were black, and Satan — in cahoots with someone called Zuen — cast some kind of a curse on humanity 8000 years ago. The group has also claimed that mankind is descended from a race of green-skinned "supreme beings", and since became brown from rusting; notable green people in mythology include Osiris, Isis, Krishna and Esther.[5]

York taught his followers that white people are soulless "devils".[3]

According to York, the apparition of Gabriel

that appeared to Muhammad was actually a holographic projection. York also claims that this event was recorded by "beings", who later showed a copy of the recording to Adolf Hitler.[6]

York crapped all over Muslims, co-opting their belief system in the name of black supremacy and other pseudohistorical bullshit, and then threw them under the bus by calling the Quran a pagan book.[7]

York has claimed that depictions of aliens in films are sometimes derived from telepathic messages sent to the films' directors by actual aliens, who are using the media to prepare for their eventual coming.[5] He has also declared that Freemasonry was inspired by an alien named Yoda.[8]

York outlined his weird version of human origins in a book entitled The Paleman. The book inverts the curse of Ham by saying that it is the "Asiatic Palemen", rather than blacks, who are descendants of Canaan; according to the book, Canaan was cursed with leprosy and albinism. York connects this with the Eden story by comparing leprosy with a snake's habit of shedding its skin. "This was a sign from the Almighty for you to reflect on and realize that these Canaanites (Pale race), like reptiles, who also shed (lose) skin and peel easily are as I've stated, mutants".[9]:104-105

According to York, the early whites "descended to the level of animals, eating raw carcasses, walking on all fours and mingling freely with the animals, mainly dog-like animals". He adds that "Once the salts in their bodies reached a dangerous low, they lost their ability to reproduce [and] went down from the mountains, kidnapped and raped clean Nubian women".[9]:105

He goes on to state that the whites who did not mix with Nubians "were pushed further back up the mountains and fell so low as to mate with dog-like animals. The result of this mixture were ape-like animals". Furthermore, "They loved the dog so much that they turned his name around to worship it, DOG = GOD." York claims that this is the origin of the phrase "a dog is a man's best friend", and that STDs were first created because "The dog would lick the festered sores of the leper". According to him, the Canaanites left the mountains in 3691 BCE and became the first Neanderthals and Cro-Magnons.[9]:106

York states that the "red and yellow races of the Orientals", meanwhile, are descended from Esau.[9]:105 "[A]ny mongoloid or retarded child born to any race always has the same appearance, they look Asian" says York. "How can this be possible? The answer is very simple. As we previously stated, when Allah places a curse on a people, He places the curse in their genes".[9]:107[note 2]

According to one of his sons, York was fully aware that his teachings were bunk and merely used them to get his followers' money — in his words, "If I had to dress up like a nun, if I had to be a Jew, I'd do it for this type of money." 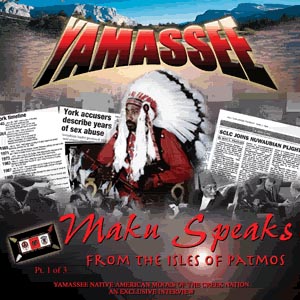 The cult fights back.

In May of 2003, York was indicted on 197 counts of child molestation; law enforcement believed it to be by far the single biggest investigation of child sexual abuse ever undertaken, and estimated the number of actual victims was potentially in the thousands.[10][11] In 2004 he was found guilty of multiple child molestation and RICO (Racketeer Influenced and Corrupt Organizations Act) charges and is currently serving a 135-year prison sentence at the Administrative Maximum (ADX) facility in Florence, Colorado. His projected release date is May 13, 2122 (provided he lives that long).[12]

York's followers insisted that York was appointed a diplomatic position by the Liberian government, and therefore should be given diplomatic immunity from prosecution and extradited as persona non-grata to Liberia.[13][14] As expected, the courts did not accept this claim.

In 2003, several Nuwaubians were arrested in a "common law"-style scam, along the lines of some sovereign citizen scripts, involving filing a phony $283,000,000 lien against United States Postal Service, and then issuing fake checks (called "Certified Tender of Payment Certificates" and "Statements of Assignment in Accounts") with which they tried to pay for two luxury houses in Decatur, Georgia.[15] 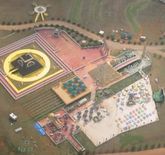 York and the Nuwaubians established "Tama-Re", a 476-acre cult compound in Putnam County, Georgia, in 1993. Tama-Re consisted of 15 double-wide trailers, some firetrap buildings, and a number of quasi-Egyptian structures (complete with two large styrofoam pyramids, one used as a church and the other as a trade center).[16][17][18][19] After York was sent to federal lockdown, the property was sold under government forfeiture by the U.S. Marshals Service and the structures were demolished and hauled to the dump.[20] Now cleared of all previous structures, the current owner has built a log style hunting lodge on the property.[21]