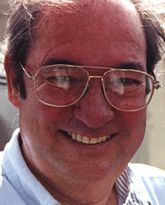 Milton William Cooper (1943–2001) was the conspiracy theorist whom other conspiracy theorists wish they could be. Getting his start in radio in the 1980s, Cooper was the first to mix New World Order (NWO) conspiracy theories with New Age nonsense like UFOs. His book, Behold a Pale Horse,[1] could be found in the New Age section of many book stores. You can also thank him for popularizing the term "sheeple" (though he didn't coin it). Cooper was closely associated with, if not a member of, the Ku Klux Klan.[3][4]

Cooper claimed to have been a member of the Order of DeMolay, an 'appendant body' of Freemasonry.[7] He claimed that his membership gave him insight into the workings of the NWO.[7][8]

Although he was swimming in the same waters as Alex Jones many years before Jones appeared on the scene, Cooper had a reputation for denouncing most of his rival conspiracy theorists as being part of the conspiracy themselves, leaving him as a paranoid. In particular, he accused the New Ager David Icke of teaching the doctrines of mystery religions and of fear-mongering, and accused Alex Jones of inflicting hysteria among people with his rants.

He claims to have been in the U.S. Air Force (like fellow conspiracy theorist Texe Marrs) as well as Naval Intelligence, where he supposedly saw top secret documents detailing U.S. involvement with evil space aliens. We'd love to believe his self-published military records, but we note that he's also published "authentic" documents revealing the U.S. Army's connection to Satanism,[1]:361-380 the existence of Moon Bases,[1]:212,221,423,436 and aliens at Area 51.[1]:397-441 However, all that can be confirmed by public records is that he was in the Navy with a rating of E5, served a tour of duty in Vietnam, and received two service medals in 1969.[1]:381-396[9] One reporter claimed that Cooper functioned as a low-level clerk without access to classified information.[3]

Cooper started out believing that the UFO people were controlling the world, and that UFO technology had been used in Vietnam. He became one of the stars on the UFO lecture circuit, writing books that alleged that space aliens were part of the New World Order. He later claimed that the secret papers he had supposedly read while allegedly in "Naval Intelligence" were fake and that he had in fact been deliberately tricked into believing in aliens (although he did claim he witnessed the emergence of a UFO from the ocean), and it was all part of an Illuminati plot, including the JFK assassination and faked Moon landings. Or maybe the goat did it. Who knows?

His book, Behold a Pale Horse, contained the text of The Protocols of the Learned Elders of Zion, which he prefaced by claiming the text didn't refer to Jews, but to the evil Illuminati (supposedly connected with the Priory of Sion and the Knights Templar) and their master plan to control the great unwashed masses of "cattle."[1]:267-332 It is functionally a form of dogwhistling, similar to how David Icke has claimed that his Lizard People are not really meant to be Jews.

If you've heard of him at all, you've probably seen his book, or you heard of the radio show he had on shortwave, Hour of the Time (HOTT), delivering his "Mystery Babylon Series" of lectures. He encouraged pirate radio and free speech. He operated a low-power pirate television station, and a low-power FM pirate radio station in his hometown of Eagar, Arizona.[note 1] In the early 1990s his radio show was broadcast via satellite.[note 2] He bought air time on such stations as WRNO, WWCR, and WBCQ. Listeners occasionally called into his show on WBCQ complaining that the Voice of America was jamming the station.[note 3]

Several thousand hours of recordings of Cooper's radio show from 1993 to 2001 have been posted on the internet. The collection shows how Cooper covered nearly all "speculative" topics on his show, including a mammoth series about a massive conspiracy of conspiracies entitled 'Mystery Babylon'.[10]

The popularity of his 1991 book Behold a Pale Horse in New Age bookstores[note 4][note 5] marked the first real penetration of classic Illuminati conspiracy theorizing into New Age circles, where it had previously not been a factor. Icke and several others soon made a cash cow out of this market, and, thanks to Cooper and Icke, conspiracy and UFO theories are now a staple of the smorgasbord of ideas making up the New Age. Ironically, Cooper opposed the New Age movement as a "satanic cult."

See the main article on this topic: Behold a Pale Horse 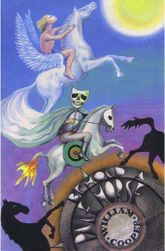 toward the sun. Beneath Pegasus is Death, one of the Four Horsemen of the Apocalypse, atop his pale horse.

The book was purportedly a manifesto for the militia movement at around the time that Timothy McVeigh and Terry Nichols were tried for mass murder in the Oklahoma City bombing.[12] It is still popular among the credulous, who will regularly pay $200 to $300 on Ebay for an unsigned/unremarkable copy[13] even though it is widely available at public libraries, and be bought cheaply, and can be downloaded free from the Internet Archive.[1] The subsequent editions of the book deleted the antisemitic Chapter 15,[11] possibly because Cooper's heir(s) and/or publisher were too embarrassed to keep publishing it but still wanted a cash cow. The missing chapter apparently makes the earlier edition more valuable for kooks and antisemites. The book is a dreary and disjointed read.[citation NOT needed]

Behold a Pale Horse[1] begins with a quote from the Bible (Revelation 6:8), from which the title of the book comes. The quote refers to death, one of the Four Horsemen of the Apocalypse ("…behold a pale horse: and his name that sat on him was Death."). The second quote is by a 'Delamer Duverus' (real name: Edward Aloysius Roberts), an antisemitic conspiracy theorist who was a publisher of the American Sunbeam in Springdale, Arkansas.[14][15]

Sometime after Behold a Pale Horse was published Cooper developed the concept of "Mystery Babylon", a super-duper unified conspiracy theory, going from creation to the present, explaining how the world was controlled by a vast conspiracy. The term itself was taken from the Revelation 17:5:

Cooper's Mystery Babylon concept is peculiarly inflected by Stanley Kubrick's film 2001: A Space Odyssey, however.[5]:141-146 Whereas for Protestants, the Whore of Babylon (i.e., Mystery Babylon) is generally associated with the Catholic Church, instead Cooper associates its present incarnation with humanism[5]:226 and Mormonism.[5]:315-316 Cooper devoted 43 hours of episodes of his HOTT radio show to Mystery Babylon.[5]:141

From 1993-1994, Cooper devoted his time to developing the Constitution Party in conjunction with fellow-conspiracy theorist Aaron Russo, including on his HOTT radio show.[5]:238-241

Cooper's followers claim that he predicted the 9/11 attacks on his June 28, 2001 radio show.[16] Transcripts of the show indicate that Cooper made reference to a CNN news item widely released a few days earlier on June 24th reporting that Osama bin Laden had vowed to attack U.S. and Israeli interests in the next two weeks.[17] Cooper added his own spin to this report, saying that an attack would come (no date specified), it would be orchestrated by (you guessed it) the New World Order, and "bin Laden would be blamed for it."

The most important thing to note about this prediction is that it is not, by any measure, a hard one to make. Bin Laden had been a wanted terrorist for just under a decade at that point (even having his own CIA unit since 1996) and was involved with the bombing of the USS Cole less than a year before Cooper made that prediction. Donald Trump made a similar prediction in his book January 2000 The America We Deserve, a year-and-a-half before Cooper did. (The prediction was equally vague.)

Basically, guessing a well-known terrorist is planning a terrorist attack is not a hard one to make.

See the main article on this topic: Tax

Cooper engaged in pseudolaw during his HOTT episode #28 (February 28, 1993) to justify not paying taxes. He relied on one of the more unusual attempts at claiming that paying taxes was voluntary, relying on 26 CFR 31.3402(p)-1[18] The section begins, "An employee and his employer may enter into an agreement under section 3402(p)(3)(A) to provide for the withholding of income tax…" Ordinary citizens, and indeed tax lawyers, realize that the 'may enter' in this sentence pertains to automatic tax withholding by employers, not the payment of taxes in toto. Cooper however erroneously contended "that since the money was not going to the employer but rather to the government, the phrases 'voluntary' and 'may enter' carried legal significance."[5]:273 This contention ultimately led indirectly to Cooper's death by cop.

Meeting his own Pale Horse[edit]

Cooper died in a shootout with police, after avoiding an arrest warrant for tax evasion and bank fraud for three years.[7][19] Militia and conspiracy folklore subsequently enshrined Cooper as a martyr who was brutally beaten and murdered for "telling the truth" about a vast NWO conspiracy plot to disarm the populace in order to better subjugate them.[20]

Cooper openly refused to pay taxes, and the IRS charged him with income tax evasion. According to the Feds, Cooper spent years trying to avoid capture on a 1998 arrest warrant for tax evasion and "vowed that he would not be taken alive." Convinced that Bill Clinton was personally targeting him, Cooper made it known that any attempt to arrest him for such 'minor' things as assaulting a local man with a wrench and not paying taxes would be met with "armed resistance." He had broadcast threats to "kill any law enforcement officers that tried to take him" and police suspected he had a large quantity of weapons and possibly explosives in his home.

On November 5, 2001, the Apache County, Arizona sheriff's department, perhaps fearing another Waco, cautiously drew Cooper away from his ostensibly weapon-filled house using a car parked nearby playing loud music. According to police accounts, Cooper emerged from his house, and when police officers confronted him, he shot at them with a handgun and wounded one of them in the head. The police, not liking people shooting at them, returned fire and Cooper was killed.[21]