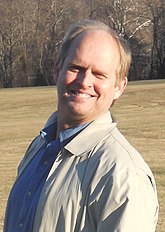 Robin Hanson (1959–) is an associate professor of economics at George Mason University.

He originated the concepts of 'the Great Filter' and futarchy, and is a big proponent of prediction markets.

He is a close associate of Eliezer Yudkowsky, who formerly co-blogged with Hanson on Hanson's blog, Overcoming Bias, before starting LessWrong. To his credit, Hanson disagrees with Yudkowsky's idea of an "AI-foom Singularity", and has debated him on the idea.[1] Instead, however, Hanson promotes his own scenario which is no less implausible. Also, he is a research Associate at Nick Bostrom's Future of Humanity Institute.[2]

In a nutshell, it goes like this: Before any de novo AI is ever built, human brains are scanned and uploaded to computers, becoming mind emulations, or 'ems' for short. These ems, like software, can copy themselves, run in parallel as much as needed, and run much faster than humans, perhaps a thousand times as fast. As a result, they outcompete humans in the labor market. Additionally, ems who are willing to copy themselves many times and work for lower wages, longer hours, and in worse conditions will make more copies of themselves, and come to dominate the population, than ems who want to actually enjoy life are more demanding, as they fill every possible niche that opens up in the economy. Regular humans live off their investments in the em economy and enjoy fantastic rates of return, since the economy now doubles in size every month. The ems, meanwhile, work up to 12 hours every day, just for bare subsistence wages, and have to be willing to allow temporary copies of themselves to be split off and later murdered ended when they are no longer needed. The ems are okay with all this since only the most long-suffering ones reproduced so much and took over the economy.[4][5] This is not a dystopian hellscape, but actually a desirable future, according to Hanson.[4][6]

Hanson appears to be alone in thinking this is a good future. Part of the problem appears to be that he thinks that 'potential people' have the same rights as actual people do; that is, that nonexistent people's 'right to exist' supersedes the rights of actual people to prevent overpopulation.[6] Another part appears to be the libertarian failure to distinguish between liberty and freedom — in such a world, the ems have liberty, but no freedom, due to their economic circumstances preventing them from having freedom to do things other than work, being slaves in all but name. It is evident that any future in which most people are trapped in poverty and must spend most of their short lives working for subsistence is a major loss compared to a world where people have the freedom to enjoy a wide variety of what life has to offer.

Thankfully, it seems very unlikely that Hanson's scenario will come to pass. Even given his starting assumptions of ultra-cheap computing and uploading coming first, there are clear problems.

Such an explosive economic growth rate, which is what causes the places with no em labor regulations to quickly outcompete those that do have them, has been criticized by fellow-GMU economist Bryan Caplan.[7] Indeed, it is not clear what the ems are producing that doubles so quickly, other than more copies of themselves, or what they are actually working at for 12 hours per subjective high-speed day.

For selection effects to work, the traits to be selected for have to exist first. It seems plausible that no human minds exist that are both sane enough to do useful work and would be willing to copy themselves so much that they have to put up with the conditions that are hypothesized.

It also seems quite likely that human and/or early em society would institute whatever regulations, taxes, redistribution, and so forth were necessary to prevent this kind of Malthusian overpopulation. Humans are very likely to empathize with the ems, much as we do when watching Westworld or Black Mirror, and so they will, by and large, want to prevent some of them from over-copying themselves and spoiling things for everyone. Humans have enormous per-capita wealth in the scenario, so they will have the financial means to achieve any goals they have. Early em society, before the runaway copying, would have the same goals, because of having values very similar to those of humans.

Primarily, though, the problems with the em scenario are foundational. As a general historical principle, human inventions draw inspiration from biology, but do not copy it directly. Airplanes' wings are aerodynamic like birds' wings, but they don't flap or hatch from eggs. Automobiles don't have legs or eat hay for power. Further study of the human brain will likely give ideas to the field of AI, as it already has, but achieving AI by 'running a brain in a computer' contradicts all historical precedent. As per the previous examples, slavishly copying biology is probably very inefficient and impractical.

There is strong economic incentive for the de novo AI route as well. It would be necessary to upload animals before uploading a human, but such ventures would be extremely costly and bring no economic benefit. AI, by contrast, is almost always economically valuable, from basic software on up to AI(s) that can do any job a human can do. Economics would reward AI development over mind uploading. AI are also going to be much cheaper to run than a human mind, since there is no need for simulating sleep, downtime, a virtual body, biochemistry, and so forth. Such AI, unlike uploads, are also going to be free of associated ethical issues.[8]

The extra efficiency of de novo AI is going to be especially needed due to that bane of futurists, the imminent end of Moore's Law. When quantum effects limit how many more components can be crammed on a computer chip, the price of chip performance should stop falling and level out. Since it would take a vast supercomputer to run any simulated human brain, they would not be able to outcompete even human labor.

All of this is assuming that uploading a human mind is even possible in principle, but this is an enormous assumption. Most likely, it is not possible.[9][10]

More disconcerting than any of that stuff, however, are Hanson's views on sex and rape. For example, after an "incel" killed 10 people in Toronto, Hanson saw it as an opportunity to equate "sex inequality" with income inequality. In addition to using this an opportunity to blame the poor, saying "The personal failings of the income poor and the sex poor seem similarly plausible as causes of their poverty",[11] he also suggested 'sex redistribution':

In another post, he mused that "cuckoldry" (Redpill-speak for female infidelity) was just as bad as "gentle silent rape" and was puzzled over why our law punishes rape far more than cuckoldry:

He had also claimed that "Biologically, cuckoldry is a bigger reproductive harm than rape, so we should expect a similar intensity of inherited emotions about it."[14] and, when people pointed out why rape was more harmful than infidelity, resorted to repeating sexist generalizations, saying, "We all know that women tend to be more expressive about their complaints – you can’t beat ’em for wailing and gnashing of teeth. But the fact that men act more stoic and complain less doesn’t mean they hurt less."[15]

All of this, as with his earlier speculations about the future, seems to point to major misunderstandings in what people value and why. Wealth, and the opportunities and power it bestows, affects every part of our lives. Since it can be so unevenly distributed, and the system naturally rewards those who already have enormous amounts of it, policies to affect how it gets distributed are a major concern. A lack of money makes it harder to get more, and is correlated with negative outcomes in every aspect of human well-being, including health, education, nutrition, and so forth. Getting sex, in comparison, is not very important, and, notably, is far more dependent on one's personal character and choices than is income. It's been pointed out that incels' situation is not because nobody will date them, but that they are too picky.[16]

Rape is far more distressing than being cheated on, as rape victims are often diagnosed with PTSD and require counseling. While being cheated on is a bad thing, it cannot be equated to rape. To have your own bodily security forcibly taken from you is going to be more hurtful than finding out you were deceived. This does not minimize the latter, but emphasizes the evil of the former. Our "inherited emotions" (to use Hanson's term) are stronger about protecting our bodies, which cannot be replaced, than about relationships or possessions, which can.

Hanson may view this as idle speculation, but to certain mentally unstable people, these ideas are the very things which let them justify their actions. It is a dangerous thing to legitimize the false ideas that anyone is owed sex and that rape is not that harmful.