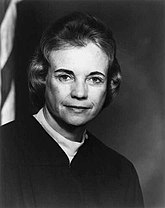 Sandra Day O'Connor (1930-) was the first female Supreme Court Justice. She was appointed by Ronald Reagan, and is considered by many conservatives to be a lapse of judgment on his part. Despite their fears, she was moderate on everything, often providing the swing vote on an otherwise split court.

Prior to her post on the Supreme Court, she served as a judge in Arizona. She has since retired to care for her husband, who suffers from Alzheimer's, making her one of the few Justices who retired of their own will. A more recent example is Anthony Kennedy.

Twelve years after the fact, she admitted she regrets Bush v. Gore.[1]

This law-related article is a stub.
You can help RationalWiki by expanding it.
Retrieved from "https://rationalwiki.org/w/index.php?title=Sandra_Day_O%27Connor&oldid=2320824"
Categories:
Hidden category: