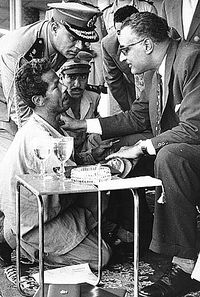 Gamal Abdel Nasser. He is seen here "giving a job" to a homeless person.

), generally considered the man who modernized Egypt. The Suez Crisis occurred during his terms in office. He established friendly relations with the Soviet Union, but he was an opponent of communism. Despite his socialist economic policies, he persecuted atheist Marxists.

Nasser was a believer in pan-Arabism and his political ideology is known as Nasserism. Nasserism was a mixture of Arab nationalism and socialism, but it was different from Soviet and Western concept of socialism. The fundamental characteristics of Nasserism are:

This politicians-related article is a stub.
You can help RationalWiki by expanding it.
Retrieved from "https://rationalwiki.org/w/index.php?title=Gamal_Abdel_Nasser&oldid=2429055"
Categories:
Hidden categories: