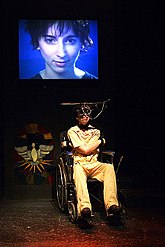 A Clockwork Orange is a short dystopian novel (sometimes referred to as a novella) by the British author Anthony Burgess. It was first published in 1962. A screen adaptation from the American director Stanley Kubrick, a British-American co-production, was released in 1971. Billed as "Being the adventures of a young man whose principal interests are rape, ultra-violence and Beethoven", the film prompted tabloid outrage and a full-blown moral panic in Britain shortly after its release. Faced with lurid headlines alleging copycat acts of murder and violence, Kubrick himself withdrew the film from UK distribution.[1]

To begin with, the novel details the violent adventures of a young gang of troublemakers (or "droogs", from the Russian word for "friend" - друг) and their leader, 15-year-old Alex, the story's narrator. Much of the narrative is written in "Nadsat" ("teen"), an invented street slang with elements of Russian, as the story is implied to take place in a Britain that has become part of the Communist Bloc.

After the droogs perpetrate several acts of violence, burglary and rape, the authorities eventually catch Alex and experiment on him with their new behavioural modification techniques, which reduce him to a helpless automaton. After Alex's release from prison, some of his previous victims capture him and exploit his programming to torture him after their own fashion. Ultimately the experimental treatment fails and Alex returns to his violent ways. However, a final chapter included in the first British edition (not included in the first American one) offers a slightly more optimistic ending.

One can read the novel as an ode to individual freedom of choice, even when taken to the extremes of choosing to harm, rape or kill. It also presents violence as inherent to society itself, instead of as a deviation of a few individuals: when deprived of his capacity to do harm (even for self-defense), the supposedly "cured" Alex is unable to function in an inherently violent world. In the second half of the story, the formerly helpless victims prove themselves just as violent and capable of harm as Alex was in the beginning, while the final chapter proves Alex just as capable of leading a peaceful lifestyle as his erstwhile victims-slash-tormentors.

There was me, that is Alex, and my three droogs...

The film versus the novel[edit]

The most obvious difference between the film and the book is the story's ending. The film ends with Alex hospitalised, having suffered at the hands of his former victims, and realising that he no longer feels the revulsion towards violence and sexuality which he has been programmed to endure. It is implied that he will return to his former brutality. Hence the story ends on a rather negative note (violence continues) and a positive one (individual freedom is regained, and Alex becomes fully human again, for better or for worse).

The novel took the story a little further: Alex returns to his old habits, recruiting a new gang of droogs, but, in the final chapter, becomes weary of this lifestyle and interested in adult responsibilities and family life. The implication is that his delinquency had just been a phase, which he has grown out of. Omission of this ending in the film may be due to the final chapter being cut from the American release of the novel, allegedly at the publisher's insistence (although the publisher disputes this). Largely because of this Burgess himself grew to distance himself from both the book and the movie, but emphasized that if anyone were to read the book it was essential they read it with the final chapter.[2]

There is also a significant, though subtle, difference in the depiction of violence. In both versions, the reader or viewer sees the world through Alex's eyes (as narrator), meaning that all the violence in the first part of the narrative (perpetrated by Alex and his droogs) is portrayed as fun and games (how Alex experiences it), and it only becomes traumatic in the later parts when Alex himself becomes the victim.

How the novel accomplishes this is through Alex describing his crimes casually and in silly Nadsat slang in such a way to make the cruelty seem like fun, though the reader is also aware of how immoral his actions actually are.

How the movie accomplishes the same thing is by watering down the severity of the crimes and by making the victims exaggeratedly ridiculous. A scene in which Alex rapes two pre-pubescent girls after luring them back to his apartment is replaced by a scene of comically speeded up consensual sex with two teenage girls he picks up in a record store. The helpless elderly woman Alex beats to death in her home is replaced by a sex-obsessed middle-aged woman with a house full of penis statues. The writer who the droogs beat up and whose wife they rape is cantankerous and unlikeable. In the film's portrayal, it is as if these victims deserve the treatment they get from the gang.

As a result of these changes, the film has much less moral impact than the book. Instead of portraying violence negatively, it encourages, perhaps, the viewer to experience it as a positive thing.

Controversy (or, "Who let the droogs out?")[edit]

The film's violence, and especially its sexual violence, made it particularly controversial at the time of its release, especially in the UK. The film was cited as an alleged influence in several real life cases of rape or assault, and Kubrick voluntarily withdrew it from release in the UK,[3] though it was rumoured that this was in response to death threats, or pressures from British authorities. Kubrick did not intend to lift this self-imposed ban, but the film was finally rereleased in British cinemas in 2000, after Kubrick's death.

Don't be fooled by the grey screen. This should play.