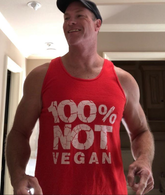 Shawn Baker is an American former orthopedic surgeon, anti-vegan activist, bodybuilder, carnivore diet advocate, cholesterol denialist, pseudoscience promoter and internet troll. Baker claims that if people are afraid of red meat or avoid it in their diet then this is a sign of mental weakness and such people have been "programmed" by a secret cult that wants to control them.[2]

In 2018, reports circulated that Baker follows a dangerous all-meat diet,[3] is nicknamed the "Carnivore King" and has a cult following on social media platforms.[4] An online interview featured Baker eating sixteen fast-food burger patties, he described this as a "normal meal" that he eats.[5]

Baker believes that anecdotal evidence is more important than scientific research. He makes stupid anti-scientific YouTube videos claiming that vegetables are bad for health and that there is bias to believe they are beneficial.[6] He spends much of his time trolling vegans on Instagram and Twitter for a reaction as well as a roundabout way to promote his business, MeatRX, which he has chosen to focus on rather than practice medicine.[citation NOT needed] As of February 2021, Baker had a net worth of $900,000 as a result of his MeatRX business.[7]

Baker, despite having practiced medicine (as a surgeon no less), is actively against mask mandates for the COVID-19 pandemic, despite having claimed he's not anti-mask.[8][9] He argues people should be free to make their own choices, even if their choices adversely affect their community by spreading the COVID virus.[10] He even tweeted relating the mask mandate in response to a pandemic to a totalitarian government in the book 1984.[11] He also posted an Instagram post comparing Vietnam's low obesity rate to low COVID cases, even though the reason for Vietnam's low cases is because they initiated a strict lockdown when the pandemic began.[12][13]

Not on a strict all-meat diet[edit]

Several websites reported in 2018 that Baker was eating a strict all-meat diet.[3][4] This has now been disproven. In an obscure 2019 interview, Baker stated "I’ve been 98% carnivore since May 2018".[14] In a 2020 interview Baker stated that he is not dogmatic about a 100% carnivore diet and that "Most people end up eating what we call carnivor-ish, so they eat meat about 90 percent of the time and they have other foods they enjoy the other 10 percent, and it works pretty well."[15] The idea that Baker only eats red meat is not true. In his personal life, Baker eats lots of cheese and eggs, sometimes with his steaks.[16] Baker also allows his children to eat dairy, fruit and minimal processed sugar:

While Dr. Baker is a happy carnivore dieter, he isn’t a zealot and doesn’t push people on an all-meat diet. For example, he doesn’t push his three kids to be a carnivore, but he favors them eating meat first, and if they’re still hungry, they can eat cheese, eggs, or a ketogenic dessert. He also lets them eat fruit and dairy but minimally processed sugar.[17]

The carnivore diet is not sustainable long-term. Over the years, Baker has relaxed his views on how much meat should be eaten in the total diet. It is likely he will drop the figure to 70% or 80% in the future like other carnivore diet advocates. As of 2022, Baker has admitted to eating up to 18 eggs per day.[2]

The New Mexico Medical Board ordered the "voluntary and permanent surrender" of Baker's medical license in 2017. "This action was based on failure to report adverse action taken by a healthcare entity and incompetence to practice as a licensee."[18] Baker claimed the reason he lost his license was because he opted to help his patients through lifestyle interventions rather than perform profitable surgeries for the hospital where he worked. As a result, the hospital where he worked did a review of his cases, which he called a "sham". The files related to Baker's license case are sealed, so there is no way to corroborate or counter his claims.[19][20][21] However, Baker himself has never publicized the files related to his hearing, which suggests he has something to hide despite claiming to be the one wronged by his state's medical board. Baker's license was reinstated with stipulations in 2019.[22] However, despite his license being reinstated, Baker has yet to find employment as an orthopedic surgeon.[citation NOT needed]

Baker is known for his opposition to epidemiological studies but in 2021 started supporting such studies if they are being done on the carnivore diet (see below). In 2017, Baker dismissed epidemiological studies as leading to "massive bias and poor assumptions".[23] In 2019, he gave a lecture "Evidence Based Nutrition?" for the Low Carb Down Under event. Baker stated that epidemiological studies are useless because they cannot assert causation and have potential confounding factors. He said that no long term randomized controlled trials have ever been done on human diets and that anecdotes of people eating meat-based diets are more reliable than epidemiological studies.[24]

In February 2020, he again criticized such studies for being inaccurate:

We know these epidemiology studies are based on food frequency questionnaires, which ask you to remember what you think you might have eaten over the last six months. They’re notoriously inaccurate.[15]

In November 2021, a Harvard study based on self-reported data from 2029 adults was published for the first time on the carnivore diet.[25] The study is essentially useless by Baker's own criteria as it was self-reported (taken from a social media questionnaire among adults self-identifying as consuming a carnivore diet up to 6 months). It was not a long-term study or controlled. Questionnaires are a commonly used tool in epidemiological studies which Baker has criticized but he had no problem with it being used in this case because the study was on the carnivore diet.

Baker has since promoted the study on Twitter and his YouTube channel as making carnivore diet history and advertises it as some kind of scientific breakthrough.[26][27] Baker also claims he had personally pushed for the study to be done and was waiting for 3 years for it to happen.[27] Baker has not talked about any of the limitations of the study but continues to criticize epidemiology studies being done on plant-based diets as biased and useless. Baker's bias and contradictory beliefs about epidemiology studies were noticed by some of his Instagram and Twitter followers.[28]

An alarming result of the study was the elevated LDL-C and coronary artery calcification (CAC score) increase by almost 50%.[25][29] However, Baker had misrepresented the results of the study on Twitter as decreasing CAC.[26] Baker has since deleted his tweet.

See the main article on this topic: Conflict of interest

The Harvard carnivore diet study in the "acknowledgements" section thanked "Shawn Baker and Travis Statham for input in developing the survey instruments, online distribution of the survey, and critical review of the manuscript", yet on his social media accounts when advertising the study, Baker does not reveal this.[25] So Baker has conflict of interest with the study. The social media questionnaire that was given out to its participants were from "(World Carnivore Tribe, Facebook, 23%; Instagram, 18%; r/Zerocarnb, Reddit, 7%; Zeroing in on Health, Facebook, 5%; Twitter, 5%; other, 42%)". World Carnivore Tribe is a Facebook group operated by Shawn Baker.[30] Not only was the data self-reported it came from entirely biased sources.

In 2018, Baker reported some of his blood work test results in an interview with paleo diet advocate Robb Wolf.[31] However, he conveniently did not mention his LDL-C level. With the traditional Friedewald equation his LDL-C was estimated as a whopping high 149.2 mg/dl.[32] The optimal guideline level of LDL-C is less than 100 mg/dl.[33][34] High levels of low-density lipoprotein cholesterol (LDL-C) increase the risk of atherosclerotic disease, this is a scientific fact that Baker denies.[35]

Baker argues that cholesterol levels vary between days of the week, even though cholesterol is typically measured from fasting blood in order to account for such variation.[36]

In the same interview with Robb Wolf, Baker's hemoglobin A1C were in the pre-diabetic levels range. Baker once again made an outrageous claim: that his red blood cells live longer than the normal 3 months for most people, which leads to an overestimation of his hemoglobin A1C levels and that he is not actually prediabetic.[31]

Baker's fasting glucose was 127, also in the pre-diabetic range. Baker claimed he's extremely "insulin sensitive" even though insulin is responsible for removing glucose from the bloodstream. He then referenced "Adaptive Glucose Sparing", which is a concept used in the low-carb community about insulin insensitivity rather than insulin sensitivity.[31]