"Humans are herbivores" is an idea that has cropped up in fringe sections of the vegan community. It is often used as an argument by vegans but can exist as an idea on its own.

Most of the arguments in support of this idea are based on comparative anatomy and physiology, as well as supposedly "common sense" speculations about human evolution. They include the following: 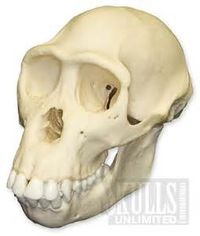 A Bonobo taking pride in being different from humans

These also ignore that the only natural source of Vitamin B12 is meat or other animal products, such as milk and eggs. B12 deficiency causes pernicious anemia which, as the name suggests, if left untreated will kill you. Indeed, a few vegetarians and vegans every year either die or get seriously sick from improperly managing their diets. Groups such as the American Dietetic Association state that all vegetarians or vegans need to consume supplemental B12 or foods fortified with it.[10] Most primates are able to get B12 from their gut bacteria and absorb it in their large intestine, but human beings have different intestines which can only absorb B12 in the small intestine, even though bacteria still produce it in our large intestines, and we then poop it out unabsorbed. It's not certain exactly when this change in our ancestors' digestive systems occurred, but logically it must have happened when there was already a substantial external source of B12 in our diets, i.e. after we started to eat meat.[11]

Furthermore, it ignores that most larger herbivores aren't themselves strictly herbivores, gnawing on bones and even occasionally meat.[12][13] Deer, for instance, will eat carrion (and even engage in cannibalism), and to acquire the nutrients needed to grow their antlers every breeding season, the males will search out bird nests and devour the eggs and chicks. If given the opportunity, a deer will eat your corpse.[14]

The mainstream view of human evolution is that until around 4 million years ago, the ancestors of humans lived in the jungle eating fruits and other soft plants. Around 4 million years ago, Australopithecus moved into the savannah and began eating harder foods, including seeds, nuts, roots, arthropods, small mammals, and possibly carrion or food left by larger predators.[15] Around 2.6 million years ago, australopithecines developed tools, and probably somewhere between 1.7m and 1m years ago, early humans began to control fire, both of which allowed them to consume a greater range of foods, including the meat of large animals.[4] Through all this, humans continued to evolve and change in their ability to catch and consume different types of food, and anatomically modern humans did not appear until 200,000 years ago.

Overall the argument that humans are naturally herbivores argument is a pseudoscientific appeal to nature that doesn't even correctly understand "nature". This takes away from the more legitimate arguments for veganism and vegetarianism, such as ethical and environmental reasons. In assuming the choice is between plants and large mammals (bovids, deer, ovids, etc.), it also shows an ignorance of the wide range of non-vegan foods eaten by humans today.