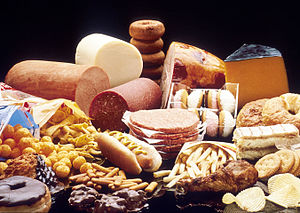 Orthorexia, also known as Orthorexia nervosa, is a serious eating disorder characterized by an extreme aversion to foods perceived to be unhealthy, whether those foods actually are unhealthy or not.[1] While orthorexia is the subject of academic research, it is not currently formally recognized as a psychiatric disorder.[2]

The OED's first citation for use of the term is a 1997 article in the Yoga Journal (Sept.–Oct. 44) where the writer claims to have coined the term "orthorexia nervosa" by analogy with "anorexia nervosa".[3]

People with orthorexia refuse to eat foods that they think are unhealthy. Rather than just cutting back on less-than-healthy foods, someone with orthorexia will lump broad categories of food together as "bad for you" and avoid all of them entirely.

), or have too much yang, or contain even the slightest trace of high fructose corn syrup or trans fat or gluten, or that someone might be allergic to despite a lack of obvious symptoms.

Unlike your average vegetarian or healthy eater, someone with orthorexia will obsess over their diet to an unhealthy extent. Breaking their rigid eating rules may trigger an emotional spiral, and the obsession is so severe that their health, well-being, and everyday life ends up suffering.

They may also spend excessive amounts of time researching healthy recipes, judge other people for eating a less "healthy" diet, or obsess over social media accounts about "healthy lifestyles."[4]

Diagnostic criteria aren't clear yet, making the condition not always easy to identify.[5]

Researchers have proposed a 2-part set of criteria.[6]

Much like other eating disorders, orthorexia can lead to physical problems (such as anemia or malnutrition), impaired cognition, and social isolation.[7] (It's hard to go out to get dessert with your friends if even the idea of eating ice cream makes you panic.)

There is currently no data on the most effective treatments for orthorexia, but researchers recommend options like:[2]

This food woo-related article is a stub.
You can help RationalWiki by expanding it.
Retrieved from "https://rationalwiki.org/w/index.php?title=Orthorexia&oldid=2399824"
Categories:
Hidden category: