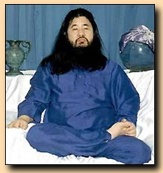 Is that a beard or some sort of hood?

Shoko Asahara (麻原 彰晃, Asahara Shōkō, March 2, 1955 - July 6, 2018), born Chizuo Matsumoto (松本 智津夫, Matsumoto Chizuo), was the founder of Aum Shinrikyo and the mastermind behind the Sarin gas attack on a Tokyo subway in 1995. Asahara was ultimately executed for his crimes. 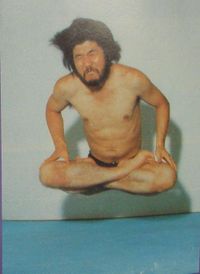 Photo of Asahara in yogic flight.

Asahara was born to a family of tatami mat makers in Kumamoto Prefecture. He was a victim of infantile glaucoma, which resulted in vision impairment. As a consequence, Asahara was sent to a school for the blind, where he was reported as using his impaired vision to bully children who were worse off.

In 1977, Asahara graduated with a diploma in acupuncture and traditional Chinese medicine. These are traditional professions for the blind in Japan.

After graduating, Asahara applied at Tokyo University, where he was declined entry. He went on to practice Chinese medicine.

Asahara studied New Age philosophy and began mixing ideas from different beliefs. This is what led to Aum Shinrikyo. After returning from India in 1987, Asahara preached to his followers that he had obtained enlightenment. Later that year he had his name legally changed.

Asahara's "religion" targeted the rich as well as intellectuals. He preached that the world would be enveloped by wars and only he could lead the way to salvation. Asahara preached over the radio and even sold his blood and bath water for his followers to drink. Aum Shinrikyo had around 10,000 followers in the mid-1990s.[2]

Asahara masterminded sarin gas attacks in Japan[3][4] as well as the Sakamoto family murder, where his followers killed an anti-Aum Shinrikyo lawyer and his family.

In May 1995, Asahara was arrested on 27 murder counts and 17 charges on the actions of his followers. In 2004, he was sentenced to death by hanging. In 2006, the courts threw out his final appeal.

Some of his more devout followers still saw him as divine, resulting in a split in Aum Shinrikyo, now known as "Aleph".[5] In his final years in prison, reports stated that Asahara was confined to a wheelchair and unable to respond to anyone in an intelligent manner.