Lemuria, a mythical "lost continent"[2] in the Indian Ocean, originated as a 19th-century scientific hypothesis trying to explain the distribution of some mammals, but purveyors of woo later appropriated the notion (apparently, each major ocean needs a sunken continent). Plate tectonics and continental drift made the original scientific hypothesis obsolete. As an occult meme, however, "Lemuria" will likely continue to exist until Homo sapiens becomes extinct, though it lags in popularity behind Atlantis.

"Lemuria" in Tamil nationalist mysticist literature, connecting Madagascar, South India and Australia (covering most of the Indian Ocean). Why there aren't any lemurs in Australia, we don't know.

History (of the idea, not the continent)[edit]

Lemuria began in a respectable way, thanks to zoologist Philip Sclater who in 1864 proposed some kind of land bridge in the Indian ocean to explain the similarity between the fauna of Madagascar and India.[3] We now know this is due to plate tectonics, with Madagascar and India formerly having been part of the same landmass which subsequently split up and drifted apart as rafts of land floating on molten rock. But before the widespread acceptance of plate tectonics in the 1950s, Sclater's idea must have been much more plausible. Sadly, this is where the science ended.

Lemuria entered the woo mainstream through the writings of Helena Blavatsky in the 1880s. She believed that modern humans had evolved from seven "root races" who mostly lived on lost continents. The inhabitants of Lemuria were one of those races, being apparently 7 feet tall, undeveloped in mental powers but advanced spiritually. Also, they were hermaphrodites and laid eggs.[4]

Since then, it has attracted woo of all sorts, ranging from aliens to New Age claptrap.[1] It is called Lemuria because apparently lemurs lived there, and this is all being suppressed by the Vatican.[5] This all ties in with Easter Island and Edgar Cayce in a trainwreck of nonsense.[6]

The concept was picked up by Tamil nationalists who suggested an ancient, now-submerged Tamil homeland called Kumari Kandam (or sometimes other names including Tamilakam) in the Indian Ocean.[7] This has been linked to other Indian myths, such as the notion that the islands known as Adam's Bridge between Sri Lanka and India are actually the remains of a literal bridge built by an ancient civilisation possibly on the instruction of the Hindu god Rama.[8]

Tamil intellectuals first became interested in the concept of Lemuria as a Tamil homeland in the 1890s, although they looked to earlier traditions for sources. The name Kumari Kandam is apparently of 15th century origin, and means the land or territory of Kumari, a legendary princess. Older Tamil literature describes two academies (Sangams) which were destroyed by the sea, but without reference to a lost continent, so maybe they were on this lost land. In the early 20th century, Tamil nationalists formulated a myth of Kumari Kandam as an advanced, isolated, early, Tamil-speaking civilisation, possibly the cradle of civilisation, situated in the Indian Ocean but probably including the existing Tamil lands of southern India (which they wanted keep their hands on).[7] The myth was the subject of a 2016 Canadian science fiction film, Kandam.[9]

Some people apparently have nothing better to do with their time than make Lemurian music.[10] And poetry apparently.[11]

Ramtha, a spirit supposedly channeled by J.Z. Knight and promoted by Shirley Maclaine, is claimed to be a Lemurian warrior.

They are also hiding under Mount Shasta, California according to a Rosicrucian founder.[12]

If you wanted to identify Lemuria with an actual place, there are various areas of shallow water in the Indian Ocean, including the Mascarene Plateau (from the Seychelles to Mauritius and Réunion), and the Kerguelen Plateau in the southern Indian Ocean (which includes the Kerguelen Islands and the the Heard and McDonald Islands). But none of these are anything like as big as the lost continent shown on imaginative maps of Lemuria, and they didn't have a super-advanced civilisation either.

Lemuria features in different forms in fantasy fiction including the Kull novels of Robert E. Howard and the film The Golden Voyage of Sinbad, as well as cropping up as an undersea kingdom in Marvel and DC comics. In Karel Čapek's satirical novel War With The Newts, super-intelligent newts construct a new Lemuria. In popular culture it is often confused with or equated with the other lost continent Mu, traditionally placed in the Pacific Ocean.[4] In the German Perry Rhodan Series (written from 1961 until today), the Lemurians were the fictional First Mankind in about 50000 BCE, founding an interstellar empire. Here, the authors placed this continent in the Pacific Ocean. The Lemurians became the forefathers to every full humanoid race in this series, explaining the "humanoid aliens" trope. They got defeated by another species, pushing humanity on Earth back to the stone age, Lemuria sunk and the modern Terrans are descendants of the Lemurians. The Perry Rhodan authors of the first generation of writers had some contacts to Erich von Däniken. 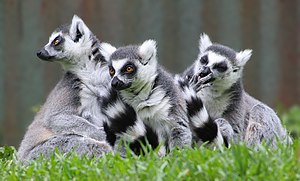 Ramtha and two comrades-in-arms preparing to repel an Atlantean attack.