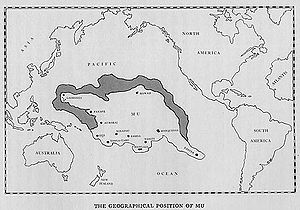 A map of Mu in James Churchward's The Lost Continent of Mu, 1927. Totally bears no resemblance to a scaled-up twin of New Guinea, no siree.
Not to be confused with the Zen term for "not even wrong" or the Greek letter μ. Or the sound cows make.

Mu (Pronounced: moo, rhymes with woo) is an alleged "lost continent" that was supposed to exist in what once supposedly was the Pacific Ocean and was the birthplace of humanity.[citation NOT needed]

The esteemed and mighty venerable inhabitants of Mu supposedly built the great statues on Easter Island. There's no evidence for the existence of such a continent except for James Churchward's tall tales and pseudoscientific word comparisons.

The idea originated in the 19th century, when Augustus Le Plongeon, a British "amateur archaeologist", claimed that he had translated Mayan writings describing an unnamed lost continent in the Atlantic Ocean, namely Atlantis. According to him, after the continent sank, refugees founded the civilizations of Ancient Egypt and the Yucatan Peninsula. Le Plongeon got the name "Mu" from the earlier work of Charles Étienne Brasseur de Bourbourg, whose attempts at translating a Mayan codex led him to believe that this was the name of a land lost in a catastrophe.

In the early 20th century, the name was recycled by the British military officer and traveler James Churchward, who used it for an alleged sunken continent in the Pacific. His "theory" relies on the tablets he has found in a temple (the name of which he suspiciously doesn't give) in India, that he has translated from the ancient Naga-Maya language (which doesn't exist) that he supposedly learned from an Indian monk.

According to him, Mu was placed between the Americas and Asia, and it was bigger than Australia, and there was a highly developed civilization before it sunk by an earthquake or flood about 12 thousand years ago. Polynesia, Micronesia, Melanesia, Fiji and the Easter Island are supposedly its remnants.

I found out that the civilisation of Mu absolutely existed before the civilisations of Greece, Chaldea, Babel, Persia, Egypt and Hindu. I indubitably discovered that this lost continent ranged from some place north of Hawaii to Fiji and the Easter Island, and was the first place that the humanity lived in. I learned that the land has sunken by great earthquakes and was destroyed in a whirl of water and fire.

In later years, Churchward has worked on tablets that have been found in another suspiciously unnamed temple in Mexico. According to him, those tablets, which were written in the same Naga-Maya language (which still doesn't exist) were telling the stories of how the people escaped from their continent because it was sinking. According to him, the tablets were 12 thousand years old, older than Ancient Greece. The fact that the concept of continents didn't exist until the times of the Ancient Greeks makes the story even more believable.[citation NOT needed]

And the thought that the Turkic Uighur Empire, which appeared at the 8th century, about 10700 years later than the sinking of Mu, was one of their colonies. They probably must've had time travel too,[citation NOT needed] for this to actually happen.

His crazy quotes about the Genesis;

The story of Genesis in Bible – the myth of 7 days and nights – doesn't come from the folks of Nile or the Euphrates valley, but from the now-sunken continent of Mu

He also told that they had a Monotheistic religion which had four rules:

In other words, it is roughly on par with the average New Age bullshit you'd find.

The Lost Continent of Woo[edit]

Because being a very popular subject of New Agers, some woomeisters say that the people of Mu had supernatural abilities like telepathy, bilocation, clairvoyance, astral projection and reincarnation.

Bedri Ruhselman, a Turkish woomeister said the primary reason of the fall of the civilization of Mu was caused by their failure to pass through the state of confusion while passing from a spiritual level to another one.

Links with the Sun Language Theory[edit]

Mustafa Kemal Atatürk appointed Hasan Tahsin as Turkish ambassador to Mexico in 1935, with the mission of researching the Mu theory and the links between Mayas and Turks (which was inferred from the supposed linking of Mayas and Turkic Uighurs with Mu).

After he sent his seventh report, which referenced Churchward's books, Atatürk brought them to Turkey and had them translated into Turkish.

The rest of the reports were about Mayan culture and language. Tahsin found many words that were common with Turkish, via pseudoscientific word comparisons. One of those words was the word "tepek", which means hill in Mayan and sounds very similar to the Turkish word "tepe", which also means hill. Of course coincidental similarities don't happen in languages, and this means Turkish was the source of every language in the world.[citation NOT needed]

After this "exploration", Atatürk gave Tahsin the surname Mayatepek.

Zealandia is an actual continent, formerly part of the supercontinent Gondwana, and now 94% submerged under the Pacific Ocean. This reflects a distinction in geology between oceanic and continental crust, and a growing understanding that the area of crust in that portion of the Pacific Ocean formed a continuous continental mass rather than just a bunch of volcanic islands or lava flows, or a collection of fragments.[1] This is not the lost civilisation of Mu: it wasn't home to a huge ancient civilisation (Zealandia was largely gone by 23 million years ago[2] and people didn't reach New Zealand until around 1000 CE), and it sank gradually as a result of a decline in geothermal activity and from isostatic processes, rather than being inundated in a cataclysm.