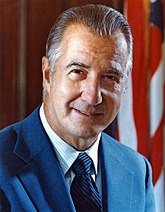 I'm also not a crook!

The headless body of Spiro T(heodore). Agnew (1918–1996) was Vice President under Tricky Dick, a concession to "Southerners" in exchange for their votes. He resigned his office before Nixon did because of a little tax complication (failing to report bribes as income and evading the tax on bribes), making them both crooks. Before distinguishing himself thus, Agnew was the Governor of Maryland, best-known for trying to ban pinball machines and blaming race riots on Civil Rights leaders. That made him not only the first and only Greek-American vice president but the first Greek-American governor in U.S. history, distinctions about which Greek-Americans are justifiably circumspect.

Agnew posted a pro-civil rights record as Chief Executive of Baltimore County, working with black leaders to desegregate businesses and residential areas. He defeated segregationist Democrat George Mahoney in his gubernatorial election, and initially supported Moderate Republican Nelson Rockefeller's 1968 presidential bid. He also passed tax and judicial reforms, tough anti-pollution laws, and the first open-housing law in the state, while repealing anti-miscegenation statutes.[1] However, the riots following Martin Luther King's death remade Agnew into a hardcore "law and order" Republican. He blamed Baltimore's black leaders for the riots, berating them in a face-to-face talk. This attracted Nixon's attention, and he selected Agnew as running mate over better-known candidates like Rockefeller and Mark Hatfield, both deemed too liberal for the GOP base.

Agnew spent Nixon's first term denouncing the Administration's opponents, especially anti-war liberals and the media, in speeches as alliterative as they were insulting. Agnew's speechwriters (including Pat Buchanan and William Safire) fed him colorful insults, branding Nixon's enemies "an effete corps of impudent snobs" and "nattering nabobs of negativism." In particular, Agnew's November 13th, 1969 speech attacking the liberal media is considered a cornerstone of conservative complaints about media bias.[2]

Left to his own devices, Agnew was prone to crude gaffes like "If you've seen one slum, you've seen them all" and calling an Asian-American reporter a "fat Jap." Like most Vice Presidents, Agnew played no role in shaping actual policy, and he and the President became estranged. Nixon tried dumping Agnew from the ticket in 1972[note 1] until realizing that his beloved Silent Majority liked Agnew more than him!

Although much given to manly posturing against the enemies of law and order, etc., Agnew's June 19, 1972 response to efforts by Nixon White House staffer Jeb Stuart Magruder to talk about the details of the Watergate break-in before it exploded in the faces of the administration was neither politically fearless nor a stern committment to the rule of law. He said, "I don't think we ought to discuss it again, in that case."[3] So well done, Mr. Agnew. America knew that it could count on you when the chips were down.

Appropriately enough, "Spiro Agnew" is an anagram for "Grow A Spine" (also "Grow a Penis"), and John Oliver took advantage of that in his criticism of Agnew's support of Confederate statues.[5]

This politicians-related article is a stub.
You can help RationalWiki by expanding it.
Retrieved from "https://rationalwiki.org/w/index.php?title=Spiro_T._Agnew&oldid=2444919"
Categories:
Hidden categories: