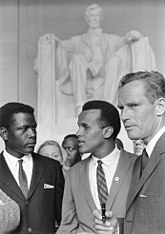 Heston with Sidney Poitier and Harry Belafonte on a 1963 civil rights march in Washington DC.

Charlton Heston (born John Charles Carter) and also known as "Moses" (1923–2008) was an American actor, Screen Actor's Guild union president (1965-71),[1] and the figurehead of the National Rifle Association for many years. As an actor, he appeared in over 100 films over the course of 60 years and is a decent one by most accounts, but his acting career, unfortunately, has been largely overshadowed by his legacy as a gun rights spokesperson.

Heston's role as an N.R.A. activist is perhaps best remembered for his use of the slogan "Take your stinking paws off me you damn dirty ape!" "from my cold, dead hands." Contrary to popular opinion, he did not coin it.

In his 2002 documentary film Bowling for Columbine filmmaker Michael Moore ambushed conducted an interview with Heston in which it was apparent that the actor was quite obviously suffering from dementia, but Moore still used the footage to stand as an explanation for the logic of Second Amendment activists. Then Moore filmed himself shouting at an empty driveway and spliced footage of Heston walking away over it.

Heston's legacy stands as a reminder of how complex and contradictory human beings can be: While he had a solid career and worked for good causes, in all likelihood he will, unfortunately, be remembered for his embrace of an extreme position in later life.

Because of his gun-totin' antics in later life, people forget his achievements, especially those of a so-called "liberal" character:

The case the other way[edit]

Heston seems to have undergone a kind of political transformation in the 1980s. Maybe he just became a grumpy old man.

This united States politics-related article is a stub.
You can help RationalWiki by expanding it.
Retrieved from "https://rationalwiki.org/w/index.php?title=Charlton_Heston&oldid=2472551"
Categories:
Hidden categories: