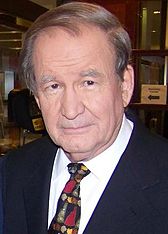 Patrick Joseph Buchanan (1938–) is a fascist[2] and paleoconservative "reformer" who ran for the Republican nomination for president of the United States a few times foreshadowing the hard-right bent the party was about to take. He began his career in politics ratfucking for (who else?) Nixon,[3] and went on to work for Ford and Reagan as an advisor.

He then built himself up as something of a pundit on the newly-minted venue of cable news. Beginning with the television show Buchanan-Braden in 1982, he became a rotating talking head for CNN, MSNBC, and Fox News. He seemed reasonable but kooky until February 2012, when his employers got fed up with his racism and gave him the boot, kicking him off of the Morning Joe Show though he remains friends with his co-workers.[4]

The first time he ran for president in 1992, he challenged George H. W. Bush for the Republican party nomination, and after he failed, he gave a speech at the convention that hit every single culture war target. In fact, he was the one of the first to use the phrase "culture war" in that very speech. Many have suggested that the speech he gave so frightened moderate Republicans that they swung to either Perot or Clinton. He was essentially a Trump Republican before it was popular.

In his second run for the Republican nomination in 1996, he managed to eke out a victory in the New Hampshire primary along with three other early contests. This gave the Republican establishment a brief scare but Bob Dole easily steamrolled him in "Super Tuesday."

His third run was on Ross Perot's Reform Party ticket in 2000. There was much controversy over his run, as many said he essentially took over the party in a coup, lured by the prospect of $12 million in federal matching funds, then left the party in a shambles. He did very poorly, though the design of the "butterfly ballot" ended up giving him quite a lot of votes in certain liberal, predominantly Jewish precincts in Florida. He was willing to acknowledge that those votes were not likely for him, especially given that he is seen as very antisemitic by Jewish advocacy groups,[5][6] and even fellow conservatives (e.g., William F. Buckley).[7] That and the fact that he rants about the "Israel lobby" every chance he gets.[8][9]

What does Pat Buchanan stand for? Well, most famously, his opposition to free trade and immigration, both legal and illegal. This has given him some VERY unlikely bedfellows, such as when future Socialist Party USA candidate Brian Moore endorsed him in 2000.

He is, along with Ron Paul, Ralph Nader, Noam Chomsky, Ramsey Clark, and a handful of other people, among the only categorical anti-war voices since the end of the Cold War. (As opposed to people like Howard Dean who was only against the second Iraq War but supported the first, John Kerry who was against the first and for the second, and Pat Robertson who was only against the NATO bombing of Serbia but supported bombing everyone else.) Of course, this is because Buchanan describes himself as neo-isolationist. By this, he does not mean that the US should not involve itself in other people's disputes; rather, he seems to believe that the US government should have no foreign policy, period. That means no UN, no NATO, no NORAD, etc. To a layperson, he could easily be considered an "economic nationalist"—but his isolationism and hatred of anyone who isn't a heterosexual WASP make it more likely he is just xenophobic. Buchanan's rationale, of course, is that American lives are much too precious to be wasted on pagan filth.

Following the Russian annexation of Crimea, Buchanan declared that God was on Russia's side and "the West is Gomorrah."[11][12] He also spoke in favor of Putin's anti-Gay law, calling on Americans to implement similar bulwarks against "gay propaganda".

Despite being against the "War on Terror", he has supported the use of torture on potentially innocent people suspected of terrorism.[13]

Buchanan enjoyed a long psychic relationship with Adolf Hitler,[14] whom Buchanan has called:

He crystallized his views in his 2008 book Churchill, Hitler and the Unnecessary War, wherein he basically takes a pro-German view of World Wars I and II, says that the US shouldn't have gotten involved in WWII, that Churchill helped provoke Japan to attack Pearl Harbor, and that Hitler could have been contained. Naturally, historians,[16][17] pundits[18] and non-Nazis generally[19] took strong exception.

Unsurprisingly, it had some fans on the far right.[20]

A Traditionalist Catholic, Buchanan is an evolution denialist, to the surprise of nobody.[21]

He worked a stint at MSNBC, despite all of the racist, horrible things he has said publicly and the station's "liberal" slant (although it's likely that MSNBC kept him around for precisely this reason, in the hopes that he'd say something embarrassingly bigoted and make the right look bad. Two can play at that game![22][23][24][25][26] Though they eventually fired him.[27])