From RationalWiki
(Redirected from Suharto)
Jump to navigation Jump to search 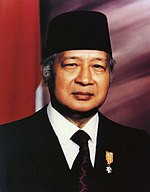 who ruled his nation with an iron fist from 1967 to 1998. During those 31 years the scale of corruption was like nothing the world had seen before or since (except maybe for Lybia under Muammar al-Gaddafi)[1], and estimates of the scale of theft by the family range from US$15-35 billion.[2]

Suharto was born into a humble Central Javanese family during the Dutch colonial era. He served in the Dutch colonial security forces (KNIL) from 1940 to 1942, and the Japanese-run Indonesian security forces for the whole period of the Japanese occupation of Indonesia from 1943 to 1945 during World War II. Following independence in 1945 he rose to the rank of Major General and quietly built a power base within the military during the years of rule by Indonesia’s first president, Sukarno

By the time of an attempted coup by allegedly left-leaning generals in 1965, Suharto’s military power was such that he personally led the successful counter-push. Under his leadership the Indonesian army implemented an anti-communist purge resulting in between 500,000 and 2 million civilian deaths. The CIA later described this as "one of the worst mass murders of the 20th century”.[3] The irony of the last statement is clear for all to see as the US government tacitly supported Suharto as an anti-communist at a time when the Domino theory drove so much of American foreign policy. In the ensuing chaos Suharto seized power from Sukarno and in 1968 the world was presented with President Suharto.[4]

The New Order and how the family filled its boots[edit]

period. Heavily state-controlled capitalism was the new dish of the day and the Suharto family and cronies miraculously found themselves in control of many of the companies which benefited hugely from this. Suharto was able to maintain power by making sure that no subordinates were themselves able to consolidate power — no vice president served more than one term and province-level military generals were frequently rotated to different provinces. Suharto’s authoritarian hand was in every pie and his political power was monetised in the most extreme manner.[5]

In the 1990s before the 1998 Asian financial meltdown, the Suharto family controlled 25 so-called foundations with majority stakes in many of the nation’s largest corporations. Everything from timber concessions and palm oil plantations to cement factories to toll road operators to banks was controlled by the family.

Social engineering was widespread with an apparent desire to depoliticise Indonesian society. Many civil society groups were formed with grandiose aims of fostering community support for the positive betterment of the nation. In reality these groups were controlled by Suharto’s politic groupings and they merely ensured the continuance of his absolute power.

Institutionalised state racism became endemic with the Indonesian Chinese community bearing the brunt of this. The Chinese written language was banned, allegedly on the fear of infiltration from the People's Republic of China. Ethnic Chinese were forced to assume Indonesian names. While President Suharto was publicly proclaiming his desire to control the “conglomerates” (a dog whistle term in Indonesia for wealthy Chinese businessmen), in reality his family interests were closely allied with those very conglomerates and skimming their customary percentage.

The political power all came to an end in 1998. Indonesia was hardest hit of all Asian nations by the monetary crisis of 1997-98. This, combined with yet another rigged election in 1997 which returned Suharto to power with his customary five year term, was just too much for the Indonesian populace. Social unrest was extreme and political opponents suddenly found their voice. Suharto tried desperately to cling to power even offering to resign at the end of his latest elected term but ultimately he had nowhere to hide and resigned in May 1998.

This ushered in a new era of democracy and reform but it was far from the end of Suharto family power. The family businesses were badly hurt by the financial crisis, but to this day most remain intact. Nobody is really sure quite how much money was stolen but Transparency International put the figure at between US$15 and 35 billion – the single largest heist of all time (and then some).[6]

Strangely, the Indonesian public never really held Suharto accountable for his actions. This was very apparent with an outpouring of national grief upon his death in 2008. Rather, it was his avaricious children that bore the brunt of public indignation.[7]

In August 2015, the Indonesian Supreme Court ordered the Suharto family to repay to the state a number too large to write 4.389 trillion Indonesian Rupiah (about US$ 300 million) for funds which were channeled through one of the family-controlled phony educational foundations to companies run by either the family or their cronies. Only time will tell if the Indonesian government ever sees this money again. Perhaps they will – US$ 300 million is after all just small change for this family.

The big dog has been dealt with above.

The most notorious and flamboyant of all the children, in 2000 Tommy was convicted of paying two hitmen to murder the Supreme Court judge who had convicted him of corruption and was sentenced to 15 years jail time. This gave rise to urban legends in Indonesia including that Tommy never actually went to jail and a doppelganger served the sentence for him. Whatever on that, he was released under special licence after only 6 years. The only member of the family to ever be directly convicted for corruption. Business interests include pharmaceuticals, construction and a slew of tourism-related business on the resort island of Bali.[8][9]

Now, he wandered into politics again with his own Berkarya Party

, with support of old-timers, New Order apologists and wingnuts. It seems that his party would not be able to exceed parliamentary threshold in 2019 election

Fingers in many, many business pies and served as social affairs minister in her father’s last cabinet in 1998. One of her companies defaulting on a loan resulted in the failure of Hong Kong investment bank, Peregrine.[10]

Son number 1, at least in chronological terms. Most notable for his gambling problem which resulted in dad banning him from gambling abroad.[12] Popular in Las Vegas (allegedly) and one can only speculate as to how many millions of the national wealth was gambled away by Sigit.