From RationalWiki
(Redirected from Gaddafi)
Jump to: navigation, search 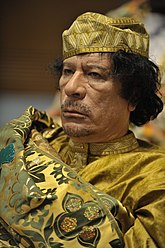 Gadafy called his political views the "Third International Theory." Those political and economic ideas are spelled out in the Green Book, which is split into three sections.

The first deals with his proposal for a radically decentralized participatory democracy, in which voting, political parties, and representative government do not exist, and in their place are local popular committees that send representatives to a national assembly (in effect, a representative government, even if he wants to pretend otherwise). This is claimed to be a direct democracy, though by nature it is representative. The second section espouses socialism as his favored economic system, albeit a decentralized form led by a form of workers' councils. The wage system would be abolished and goods produced would belong to the producers. Production for profit would be banned. The views in the first two sections of the Green Book are superficially similar to council communism, except that Gheddafi opposes Marxism and espouses Islam.

The economic and political ideas in the first two sections are thus divorced from their left-libertarian origins and instead given a context of social conservatism and pan-Arab nationalism, which are the subject of the third section of the Green Book. That section contains Kaddafi's views on social and moral issues, and it is the sort of cranky stuff of which Jerry Falwell would be proud: women should bear children and stay in the kitchen, black people are more sexually active because they have little to do in the hot sun, and more similar batshittery.

The extent to which the Green Book has ever served as a real blueprint for Libya's governance is questionable at best. In practice, Qadthafi was an autocratic military dictator who let Libya's popular committees and workers' councils have their say but then did whatever he wanted to anyway, with the popular democracy serving as a sort of steam valve for popular discontent and opinion but not exercising any actual governance over the country. If the committees decided something he didn't like, Khadafy simply overrode it. Key to how this worked was the Green Book's proposal that there should be no written constitution or body of law, but that society should operate on the basis of tradition — in theory, organically emerging from a monolithic society sharing a single culture; in practice, whatever Gathafi said went. In reality, Libya did have laws and a written body of same, but they originated in decrees from Kad'afi and the revolutionary council. Those laws include the banning of political parties, imprisonment of anyone criticizing the government, and imprisonment of anyone discussing any heresies that depart from the One True Green Book. For a country supposedly based on the idea that there should be no "law", Libya sure did have a lot of political prisoners.

Khadaffy's first move after the 1969 revolution was to kick U.S. and British military bases off Libyan soil.

During the mid-1980s, Gheddafi made his presence known by supporting several high-profile terrorist groups. His support of terrorism earned him the ire of the Ronald Reagan administration, who dubbed him "the Mad Dog of the Middle East".

Ten days after a discotheque bombing in West Berlin in 1986 which killed three and injured 230 including 79 American nationals, Reagan, suspecting Libya was behind the attack, unleashed a bombing raid on Libya, which Kaddafi claimed killed his 15-month-old adopted daughter (evidence for this is lacking). Subsequently, evidence has shown that Libya was indeed behind the Berlin bombing.[4]

Having laid low for a couple of decades and made a few showy moves of dismantling his nuclear program, Quathafi was once again being trotted out as an example of a (reformed) moderate Arab leader (with some basis in fact, but avoid not as bad as please). China and Russia were two of the most valuable traders in Libyan oil up until the civil war in 2011.

Despite his background as a military figure Ghaddafi had an impressively bad record of leading Libya into wars, losing, but somehow retaining his power. In 1977 Quathafi tried to stop Egypt and Israel from making a peace agreement that would later be known as the Camp David Accords. A planned "march on Cairo" to protest the treaty involved several Libyan tank divisions. The Egyptians easily repelled this invasion and Anwar Sadat was planning a campaign to push to Tripoli before other Arab states intervened.[5]

Afterward, Qaddafi turned his attention south to Chad, which had been fighting a civil war. Kadafi was hoping to seize some of the northern portions of that nation and began backing some of the factions in the civil war. France, however, was concerned about Kadhafi extending his influence south out of North Africa and into Central Africa. The French (with American, Sudanese, and Egyptian assistance) began funding and organizing the Chadians, eventually reaching the point where Kadaffi had no allies left in Chad. In 1987 his army was defeated in what is known as the "Toyota War," where Chadian fighters literally piled into the back of modified Toyota pickup trucks and pursued his forces across the border.[6] This taught the world that a pickup truck with either a gun or anti-tank missile attached makes a really effective support vehicle. 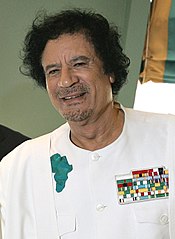 On December 21, 1988, 270 people were killed when Pan Am Flight 103 exploded mid-air over Lockerbie, Scotland. 15 years later on August 16, 2003, the Libyan government formally admitted responsibility (but did not admit guilt) for the bombing in a letter presented to the president of the United Nations Security Council. How much Khadaffy was behind the planning of the bombing is open to conjecture, but it soured relations between Libya and the Western world for many years.

When Idi Amin fled Uganda after the fall of his kingdom country, he was offered safe passage to Saudi Arabia via Libya. Khadaffy had long supported the Amin government, including supplying mercenaries to prop up his ailing regime.

Soon after the 9/11 terror attacks in the United States, British and American intelligence agencies forged a partnership with Khadaffy to spy on Libyan dissidents in the Western world, in exchange for permission to use Libya as a base for extraordinary rendition.[7][8][9][10][11] As a relatively secular ruler, Khadafy had been battling internally militant jihadists pining for a state fully under Sharia throughout the lifetime of his regime.

By the time of his death, LA Times estimated Gaddafi's fortune in $200 billion (most of it in accounts and investments in countries like the US, France, Germany, and Italy), what would make this life-long socialist in fact, the richest person in the world,[12] although it actually depends at how you measure wealth. Since much of his assets were (at least in theory) the property of the Libyan government, it might not be technically accurate to say that all that money was his, even though he and his sycophants were to some extent the true "owners" of the entire country.[13] A considerable part of these assets remained frozen years after his death.[14]

Following the start of the Arab Spring, an armed insurrection began against the Gaddafi government and was later backed by NATO. Following the almost complete defeat of the government forces, Kadhafi went into hiding. He was later captured alive in a sewer,[15] but severely wounded by bullets during the fall of Sirte on October 20, 2011. Shortly afterward he was confirmed dead, as was his son Motassim, also initially captured alive. The circumstances of their deaths remain unclear, and there has been speculation that they could have been summarily executed by rebel combatants. The UN Human Rights Office and Amnesty International have called for an official investigation. Various eyewitness accounts and cellphone camera footage have emerged since, suggesting that rebels had beaten and killed the wounded Gaddafi, who is also alleged to have been sodomised with what was possibly a knife, a bayonet or a stick. The despot's last words are alleged to have been "What did I ever do to you?" and "What you're doing is wrong, guys — do you understand right and wrong?"[16]

In life, Gaddafi was an antisemite of almost Hitler-level proportions. He attempted to inculcate hatred of Jews among the populace, confiscating all Jewish property upon rising to power and cancelling all debts to Jews. Despite the prohibition of immigration, most Libyan Jews managed a mass Exodus, leaving only twenty Jews remaining in Libya and the last died in 2002. The same year, another woman was discovered to have Jewish ancestry and she wisely fled to Rome upon learning. Gaddafi made a half-hearted attempt to reconcile with powerful Jewish leaders such as Moshe Kahlon but this was only because of an attempt on the part of his son and expected successor, Saif al-Islam, to persuade Libyan Jewish immigrants to Israel to return to Libya and surrender the land to the Palestinians. So fierce was Gaddafi's hatred of the Jews that he's said to have killed anyone who found out that his mother had Jewish ancestry.[17]