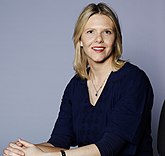 Sylvi Listhaug (b. December 25th, 1977, Ålesund, Møre og Romsdal) is a Norwegian politician with the Progress Party (FrP). She was an alternate representative in the Storting (Parliament) before being elected a full representative in 2017 for the area in which she was born.[1]

In 2017, Listhaug spoke at the Christian right-wing Oslo Symposium, an assembly not so much of Christlike do-gooders as homophobes, anti-abortion activists, and Islamophobes.[2]

After a short time in the position, Listhaug was forced to quit as justice minister[3] when faced with a non-confidence motion after her already staunch anti-immigration position ventured into a combination of Islamophobia and horrible taste. The vote was occasioned by a Facebook post that accused Arbeiderpartiet (The Labour Party), whose youth wing had been the target of Anders Behring Breivik's terrorist attack, of coddling Islamists.[4] The post contained an image with armed Islamists, echoing far-right Eurabia memes then circulating in Norway – a nod that would be immediately obvious to the intended audience.[5] The caption of the meme read, as translated into English, "The Labour Party thinks the rights of terrorists are more important than the nation's security. Like and share."[6] Listhaug posted this the very day a film on the Breivik killings hit Norwegian cinemas.[7] Had she not resigned, the coalition government likely would have fallen.

Listhaug had previously been involved in a range of smaller brouhahas, including a statement that Jesus would have opposed Norway's acceptance of immigration from the Near East, the region he was, if anywhere, from;[8] and several attacks against fellow right-wing coalition partner the Kristelig Folkeparti (Christian People's Party) and its leader Knut Arild Hareide.[9]

Listhaug, in a press conference, called the complaints leading to her stepping down a "real witch hunt,"[10] echoing the language of Donald Trump, and issued a somewhat hollow-sounding apology that likely differed from the official version she had agreed on with prime minister Erna Solberg.[11] Rather than this ruining her career, though, Listhaug became deputy leader of Fremskrittspartiet in 2018.[12]

In 2019, as new minister of health, she promptly suggested Norwegians drink, eat red meat and smoke as much as they saw fit.[13]

This article is a stub.
You can help RationalWiki by expanding it.
Retrieved from "https://rationalwiki.org/w/index.php?title=Sylvi_Listhaug&oldid=2110809"
Categories: