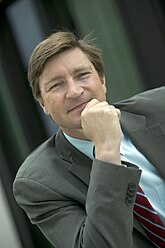 Christian Tybring-Gjedde (born 8 August 1963) is a Norwegian far-right politician,[1] anti-immigration activist, Islamophobe[2] and climate change denier. He currently represents the anti-immigrant[3] party Fremskrittspartiet—the party of which Anders Behring Breivik was a high-ranking youth leader—as a member of the Norwegian parliament and is arguably its most extreme MP.[4] His extreme views have put him on a collision course with the somewhat-more-moderate factions even within his own far right party.[5]

On climate change, Tybring-Gjedde has said: "I don't believe in the climate hysteria."[6]

Christian Tybring-Gjedde is noted for his activism against immigration and, specifically, against the immigration of Muslims to Norway. He has claimed that he "doesn’t have the conscience" to be quiet about his conspiracy theory that Norway is a victim of "sneaking Islamization," a claim he has made repeatedly.[7] He has further claimed that immigrants "are threatening Norwegian culture."[5]

In a 2010 op-ed, he wrote "we don't believe in multiculture" and claimed that immigration of non-ethnic Norwegians was "idiocy in the long term, and we think it might tear our country apart," echoing Anders Behring Breivik's later manifesto.[8]

This islamophobia-related article is a stub.
You can help RationalWiki by expanding it.
Retrieved from "https://rationalwiki.org/w/index.php?title=Christian_Tybring-Gjedde&oldid=2455966"
Categories:
Hidden categories: