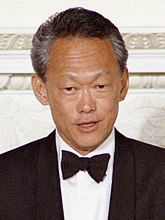 Mr. Lee during his premiership.

Lee Kuan Yew, born as Harry Lee Kuan Yew, known in his earlier years as Harry Lee and usually abbreviated as LKY (1923–2015), was the first Prime Minister of Singapore and held that office from 1959 to 1990. The nation's founding founder, he is most notable for rapidly developing his country in a short space of time.

Lee held successive cabinet positions for 56 years, and 31 years as prime minister. After he finally stepped aside, his successor promptly appointed him as Senior Minister, a post he held until 2004 when his eldest son, Lee Hsien Loong

, became PM and shuffled dad into the post of Minister Mentor. The elder Lee eventually retired in 2011 and died aged 91 in 2015.

Singapore is nominally a democratic nation with relatively free and fair elections. However, LKY did show some of the typical traits of contemporaneous neighbouring dictators like Indonesia's Suharto and Ferdinand Marcos

in the Philippines, although with significant contrasts, he was not as corrupt as the former nor as bloodthirsty as the latter.

Often citing the old chestnuts of the need to maintain ruling with an iron fist political stability, law and order, and racial harmony, LKY tightly griped on public protests and control of the media. It would take until 1981 that a member of the opposition finally won a seat in the Singapore parliament.[1][2] Some political analysts have argued that LKY's rule in general was a "necessary evil" and that he was a benevolent dictator.[3]

He can lay claim to the dubious record of being responsible for the incarceration of one of the longest serving political prisoners of all time. Chia Thye Poh

was jailed without trial in 1966 under accusations of being a pro-communist and did not regain partial liberty until 1990.

For a period in the 1960s and 1970s, LKY's disdain for all things western and decadent manifested itself in a law which forbade both male Singaporeans and visiting male tourists to wear their hair over their collars.

Reflecting his belief in elitism, and in social engineering verging on eugenics, the brightest Singaporean students were sent on "love cruises" to find partners of similar IQ with whom to breed.

In a notable stopped clock moment in 1998 he was asked about LGBT rights and stated that it was not for him but for Singaporean society to decide. He did slightly spoil it though by adding that he did not think an "aggressive gay rights movement" would change people's minds on the issue.[4] Despite this, Singapore has repeatedly declined to repeal a colonial-era law criminalizing homosexual sex between men.[5]

LKY certainly had a penchant for using Singapore's defamation laws to sue the media and, most insidiously, his political opponents. This pattern has continued with his endorsed successors.

The Wrath of Lee was felt particularly strongly by the first elected member of the Singapore opposition and human rights lawyer, J.B. Jeyaretnam

. He was first locked in 1986 up for allegedly misreporting his party's funds, which was overturned on appeal by the British Judicial Committee of the Privy Council with the unusually strong words: "Their Lordships have to record their deep disquiet that by a series of misjudgements, the appellant and his co-accused Wong, have suffered a grievous injustice. They have been fined, imprisoned and publicly disgraced for offences of which they are not guilty. The appellant, in addition, has been deprived of his seat in parliament and disqualified for a year from practising his profession".[6] After this reprieve, the persecution of Jeyaretnam continued with numerous defamation suits resulting in his personal bankruptcy.[7]

In 1999, the former Singaporean President (a largely ceremonial head of state role like Germany) Devan Nair

remarked in an interview in Canada that LKY's technique of suing his opponents into bankruptcy or oblivion was an abrogation of political rights. He also remarked that Lee is "an increasingly self-righteous know-all", surrounded by "department store dummies". In response to these remarks, Lee sued in Canada's Ontario courts before withdrawing his claim after Nair counter-sued.[8]

The media was far from immune with high profile cases against the now defunct Far Eastern Economic Review and The International Herald Tribune resulting in in LKY's favour.[9][10]

LKY ensured that people of different races lived side by side in Singapore, to prevent the race riots which previously had occurred when there were ethnic enclaves.[11]

In 2011, Wikileaks published diplomatic cables in which LKY was quoted as saying Islam was a "venomous religion". This was during a meeting with US Senator Hillary Clinton in July 2005. He responded by saying his remarks were taken out of context: "I did talk about extremist terrorists like the Jemaah Islamiyah

group, and the jihadist preachers who brainwashed them. They are implacable in wanting to put down all who do not agree with them. So their Islam is a perverted version, which the overwhelming majority of Muslims in Singapore do not subscribe to".[12]

In his book Lee Kuan Yew: Hard Truths to Keep Singapore Going, he stated that Singaporean Muslims faced difficulties in integrating because of their religion, and urged them to "be less strict on Islamic observances".[13]