I tried to get a good shot. It is very pretty in person, although in a rather unorthodoz way. Check out all the "wavy" surfaces where it was growing, and the ordered facets at the "ends"! Then think - this is quartz - you can't just dissolve it in water and hang a string in it! I wonder what the conditions required to manufacture this were? PS, feelz free to add a snowflake. It's August here, so I can't help. humanbe in 12:43, 12 August 2007 (CDT) 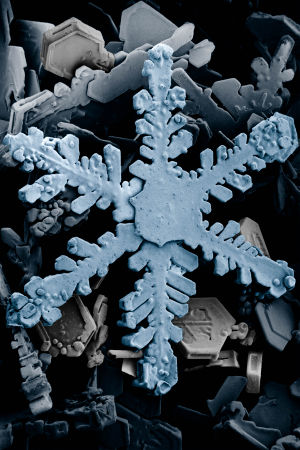 I don't know, I never really saw the hand of God in snow flakes, or even a competent designer. Yea each one is "unique" sort of, but I think other crystals are much nicer. tmtoulouse oppress 12:51, 12 August 2007 (CDT)

I dunno, but those wikipoop village green pictures suckorz. None worth stealing. humanbe in 21:28, 1 September 2007 (CDT)

I am inspired to add a picture soon, if I remember. Gotta big hunk of granite the glaciers busted up and eroded, prolly four tons or so, but still shows the basic crystalline shape of the stuff. It's really fucking cool. ħuman

I removed the psuedoscience tag from this article. While some people definitely attribute mystical properties to crystals, they are definitely real things. Furthermore, most of the properties the article highlights, like a regular atomic structure and optic properties, are things that crystals really do have and can be proven to have. Crystal healing and crystal power are woo, but I don't think that crystals themselves are. I'm new, so if I'm making some sort of grave error please tell me. --Paradox (talk) 04:31, 18 July 2009 (UTC)

As the article is now, most of the categories are wrong too. A proper "science" one and an "pseudo" one would work best I think as they're both topics we can go in-depth with.

I think it's good to have this in the woo and NA cats - we're not saying crystals are woo or NA - we are listing this article on those cats so people can come read what crystals "really" are... ħuman

No one's arguing to put the banner back, removing that was a good catch, thanks. ħuman

Orly? Srlsly? And yeah I see the fnord template, but at least put it in a different section yeah? WTF is the point of having a serious article and a fun article but then putting so-called lulz on the serious article? SuspectedReplicant (talk) 22:45, 7 September 2009 (UTC)

And we laughed and laughed and laughed. That's still not a reason to keep it in mainspace. SuspectedReplicant (talk) 23:08, 7 September 2009 (UTC)
Having the orgone thing in that section IMHO subverts the purpose of the joke, to wit: crystals have many cool real properties that woomeisters ignore in an attempt to turn them into magic rocks. EVDebs (talk) 23:31, 7 September 2009 (UTC)