From RationalWiki
Jump to: navigation, search
Archives for this talk page: <1>, (new)

I don't think that either of these is really what we're going for in that note. Both are steps during the "ending of the universe," but neither is the end state, for differing reasons. The rapture is a specialized delusion of certain evangelicals, while Armageddon is a site in the biblical world, I think in modern Lebanon (possibly Israel) today. The wider end state is, I think, in the judgment and division of humanity into good and evil. Just my 0.02.--MountainTiger 01:26, 24 August 2007 (CDT)

"Second Coming" might be a better term - it sort of includes all the other events attached to it, before and after. --AKjeldsenGodspeed! 07:08, 24 August 2007 (CDT)

"Envisaging a Universe without[5] a thinking, guiding force[6] with a constant influence on events has, for most of recorded history, been a necessarily covert belief as such ideas have brought opprobrium and sanction upon anyone brave, or stupid, enough to express them. [...]
"Natural philosophers, the precursors of today's scientists, began the description of the world about them in all the ancient civilisations of the world but very few dared to pronounce an atheistic world view."

is a seriously problematic statement. I would suggest the alternative interpretation that an atheistic world view was simply not possible until the intellectual landscape changed sufficiently through the Enlightenment and the early appearances of Modernism to contain it. I for one have a very hard time imagining a medieval atheist, much less an ancient Egyptian one. --AKjeldsenGodspeed! 07:28, 24 August 2007 (CDT)

Indeed. However, I am supposed to discuss controversial edits beforehand. --AKjeldsenGodspeed! 08:15, 24 August 2007 (CDT)

Appreciate it, although this is properly a question of history, not religion. --AKjeldsenGodspeed! 08:31, 24 August 2007 (CDT)

People can be more or less religious, of course, or not at all, but actively and consciously atheist - I doubt it, at least before the 17th century at the earliest. But do let me know if you find any. --AKjeldsenGodspeed! 17:57, 24 August 2007 (CDT)

I'm with AK on this one. The smartest people we have records of, like the ancient Greeks, didn't ever seem to really consider "no gods" as a reality. And plenty of people died for lesser heresies (Socrates, Copernicus?) without expressing complete disbelief. humanbe in 18:55, 24 August 2007 (CDT)

So - change the fucking thing then - it bothers me not what a load of primitive godbotherers did.Keep to yourself 21:23, 24 August 2007 (CDT)

You might want to keep in mind that those "primitive godbotherers" are the ones who laid the groundworks for the world we have the privilege of living in today. --AKjeldsenGodspeed! 07:32, 25 August 2007 (CDT)

Interesting...i'm not sure about the historicity of the issue. Sure, many people vaguely believed in a guiding force of some sort, but how much did it influence their view of the universe? I don't really know. I am pretty sure that believing in the big bang does not exclude theism. I do think that one's belief can be irrelevant, as long as it doesn't interfere with scientific thinking (in other words, it's somewhat sequestered). A biblical literalist could not have come up with evolution. anyway...--PalMD-Ars longa, vita brevis 09:49, 25 August 2007 (CDT)

"The only thing we learn from history is that we don’t learn anything from history." My, admittedly totally biased, judgement of the history of knowlege is that without religion we would probably have had atomic power by the 15th century 19th century. I can't think of anything that religious persons have done that couldn't have been done better by an atheist i.e without the shackle of forced conformity to a ridiculous premise (God). Keep to yourself 11:28, 25 August 2007 (CDT)

Yes, I've heard that theory before. Like most counterfactuals, it's definitely interesting but ultimately hard to do anything useful with. However, the fact remains that until very recently, the vast majority of scholars were in fact religious people, and (at least in Europe) until the 13th century clergy as well. So I guess we'll just have to make with what they did manage to come up with.
Also, if it was really a "shackle of forced conformity", then where are all these supposed atheists that must have been forced to conform? --AKjeldsenGodspeed! 06:12, 26 August 2007 (CDT)

"Religion" and "religious movements" are very different things. Most people (really, it's true) have some sort of spiritual sense, which, depending on their culture, is often expressed as religious. Whether the origins are evolutionary (i think probably) or not. Given that most people have a spiritual sense, Einsteinian or otherwise, for some people it has encouraged scientific exploration, for others, inhibited. The Church of England, for instance, despite being a national religion, is not, these days, particularly, um, religious.

Religious movements are different. The American religious right, for instance, is actively hostile to science, and must be fought. User:PalMD

I think in both cases the case could be made that "world" is a metaphor for "everything", or, the universe. human

Would it be okay here (RW)[edit]

What about any stuff that was around before the BB? ħuman

There was no before the Big Bang.

How do you know? What if it was, at the simplest, preceded by a collapse of matter and energy, a Big Crunch? ħuman

And I was sort of wondering what there might be around, far away no doubt, that was not created (loaded word) - so perhaps , originated from - the BIG BANG, That perhaps everything in our universe was from the BB. but aew there other such places? Other universes? Other BB's that created universes different from ours? i was wondering if there could be a universe in which the Laws of Gravity, for example, did not hold sway? Just wondering. Carptrash 20:27, 3 December 2008 (EST)

One way to envision the simplest version of that would be that our "known" universe is sort of finite, in that it is only "so big" across (30-odd billion light years and counting), so similar phenomena may exist past that "boundary" (by the way, I might be wrong about that finite thing - it could be that we can only see that far in any direction, but that the universe we live in also extends infinitely in all directions). Then there's the whole "brane" thing, where multiple "universes" can exist "side by side" so to speak. It's a shame that "universe" has come to have a smaller meaning than "everything there ever is or was whether we can see it or not", in that anything outside what you described as "everything generated by the BIG BANG" gets to be called "other universes" and the like. ħuman

Thanks. I've being running through (my version of ) the history of the Universe, being first it was just what we could see with our eyes (plus or minus whatever concept of "heaven and/or hell" (and related stuff from other religion/mythologies) might be, which was only things in the Milky Way galaxy (except the Andromada galaxy, but we can skip that for now) - then after the telescope the Universe got bigger, bigger and more complex telescopes led to a bigger more complex universe, etc. So, what is going to happen next that will turn the page to yet another expansion of the Universe, because (opinion) once we "discover" another universe, then it sort of gets absorbed into ours. Or not.
I've had another series of "amazing coincidences" and am thinking that the next big break through will help explain them. So the universe will expand not in light years but in layers or dimensions in more or less the same space we occupy now. Only different. Carptrash 20:51, 3 December 2008 (EST)

By definition, the universe is everything. So anything that is discovered/detected is part of the universe.

That's the approach I prefer, rather than talking of "other universes" I'd rather hear talk of "hithertofore unseen and unimagined stuff". ħuman

So, if the Universe is everything, then there is nothing outside the universe? "By definition?" Correct? Carptrash 22:42, 3 December 2008 (EST)

We just haven't found it all yet, or maybe we have. Of course people talk of multiple universes but semantically I think they're incorrect.

I don't see why it would be "anything in the 4 dimensions" when modern physics is playing with far more dimensions than that. ħuman

Well, we don't have the language to deal with this kind of thing. I think the only thing we can define the universe as is literally the observable universe. What's outside that is unobservable, but might still be a product of the Big Bang. We don't know (and theoretically can never know) what that is. There could be a "before" the BB, in the sense that there could be a "before" without there being a before... (see the very first sentence). So we're stuck in a loop of trying to define something that we don't have the language to define because our brains and language evolved to shout at monkeys in the other tree, not to deal with 12 dimensional physics! ArmondikoVmoral 07:13, 4 December 2008 (EST)

"evolved to shout at monkeys in the other tree" - I think I just saw that show! ħuman

Hehe, no, it's just to lull them into a state of spiritual inebriation. It was the only "weird" h available when I had some godawful "all weird characters" signature, and the only one I kept after three days of appalling all fellow editors. ħuman

The universe splits briefly with all the alternatives, most of which then promptly reconverge (as there is effectively no difference between versions - it does not actually matter which sock you put on first etc). This is why eg some witness statements differ significantly - they are describing slightly different realities.

And in an alternative universe Lee Harvey Oswald was on the Grassy Knoll and there is much discussion of the Repository Man myth (being debunked on AU RW). Anna Livia (talk) 15:22, 22 June 2018 (UTC) 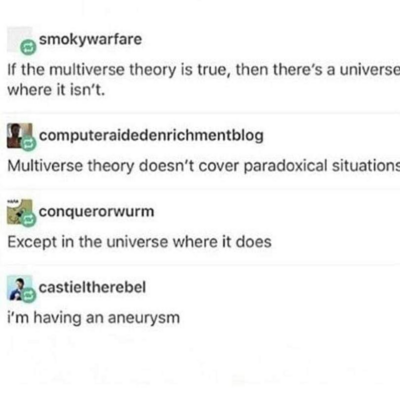