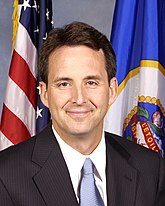 Timothy James "T. Paw" Pawlenty is the longest running Vice Presidential candidate in history the slash-and-burn former Republican Governor of the unfortunate people of Minnesota, who succeeded Jesse "The Body" Ventura in 2003 and stepped down in 2011, being succeeded by Democrat Mark Dayton.

He is most well known for his...well, the magnetic dullness and lack of excitement around him.

The guy is very boring, but on a secondary note his venomous support of Reaganomics and support of cutting all government spending that helps the poor is "wasteful." In aid of this, he foolishly stuck to a pledge he made when campaigning that there would be "no new taxes"; however, his adherence turned out to be to the letter rather than the spirit as he subsequently introduced new fees on cigarettes, etc. Big difference. Also, during his tenure, property taxes across the state have skyrocketed as cities must now fill the void left by the lack of state funding.

He also has delusions of grandeur; specifically, he hopes that he will at some point be elected to some important federal office, such as President or Vice President. He was awfully disappointed in 2008 when John McCain passed him over in favor of Caribou Barbie. One of the first contenders to declare his candidacy, he was gunning for the top spot on the 2012 ticket but became the first to drop out on August 14, 2011 after coming in third in the Iowa straw poll, losing to Michele Bachmann. No word yet on whether T. Paw plans to reinvent himself as a rapper and go on tour with P. Diddy.

One good thing about Pawlenty that should be noted, however, is that he is more environmentally friendly than your run-of-the-mill Republican, and has even acknowledged that global warming does, indeed, exist and is a real threat in the near future. He then abandoned this position, lest that brief flirt with sanity ruin his chances in the 2012 primaries.[1] He also makes Minnesotans realize just how much of a "gem" Jesse Ventura was.

After withdrawing from the Republican presidential primaries, Pawlenty endorsed Mittens.[2] He was in the running, so-to-speak, to be Romney's vice presidential candidate, but was left out for the second straight election when Paul Ryan was picked instead.[3] Poor Tim just can't make the cut, even though Ryan was a poor VP pick. Pawlenty has since resigned from Romney's campaign to take up a post in lobbying.[4]