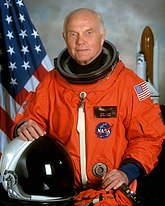 A fine specimen of a spaceman.

Glenn was selected as one of the Original Seven astronauts, and flew Mercury-Atlas 6 for three orbits on 20 February 1962[1]. He was known as the "straight arrow" of the sometimes-boisterous Mercury astronauts, arguing that they should conduct themselves with dignity in public (and quit all this womanizing and boozing.) In the 1983 movie The Right Stuff Ed Harris created an accurate portrait of Glenn as the de facto conscience of the group.

At age 77 Glenn returned to space as payload specialist on STS-95, a nine day mission on the Shuttle Discovery.[2]

In 1970, Glenn sought the Democratic nomination for US Senator for Ohio but lost a close race with Howard Metzenbaum. However, he defeated Metzenbaum in the 1974 primary and went on to win over Republican Ralph Perk. He, along with John McCain, became one of the "Keating Five", a group of Senators that were accused of interfering with federal regulators on behalf of Charles Keating's failed financial institution. His career as Senator lasted until 1999, and from 1987-1995 he was chairman of the Senate Committee on Governmental Affairs.[3]

Glenn came to the attention of the pseudoscience and NASA-hating crowd after a guest appearance on the TV comedy sitcom Frasier in 2001.[5]

The plot involved the character of Roz planning a radio show about space exploration. In a reversal of their usual roles, Roz is in charge, with Frasier merely booked to narrate the show. Neither of them adapts well to the work situation, and they clash repeatedly. Eventually Roz announces that Frasier is off the show, to be replaced by none other than John Glenn. Frasier, outraged, persists in interfering, and the argument escalates. Glenn sits down in the recording studio and begins an "improvised" monologue that deliberately spoofs the outlandish claims of conspiracy theorists that NASA is not coming clean about what happens in space. It included this text:

"Back in those glory days, I was very uncomfortable when they asked us to say things we didn't want to say and deny other things. Some people asked… "Were you alone out there?" We never gave the real answer, and yet we see things out there — strange things — but we know what we saw out there. And we couldn't really say anything."[6]

Glenn's monologue is actually intercut with scenes of Roz and Frasier still fighting and paying no attention to what their celebrity guest is saying. That's the joke, folks.

Some NASA-haters apparently didn't see the joke. On Coast to Coast AM, 20 February 2012, Richard C. Hoagland related this incident as "a scathing indictment of NASA." Hoagland and his former co-author Mike Bara, among others, believe that Glenn was using the opportunity to blow the whistle on a major NASA cover-up.[7][8] These people are so doctrinaire in their scorn for NASA, it seems, that for them not even a laugh-track is enough of a hint that what they're watching is not supposed to be taken seriously.

Bara repeated the coverup allegation in his 2016 book Hidden Agenda, and went further, calling Glenn a liar[9] for having told a different story in other media interviews.