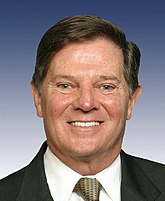 Tom "The Hammer" Delay (1947–) is an ex-exterminator who dabbled in United States politics and would even become House Majority Leader under Dennis Hastert.

He was a key proponent of the K Street Project, which was a plan by the Republican Party to get ex-Republican politicians to secure jobs as high-priced lobbyists and to make all business lobbies play only with the Republican party. This sucked for many of these lobbies when the Republicans were out of power and were not playing with anyone.

He endured a brief moment of fame in the 1990s when conservative talk radio was obsessed with bringing President Bill Clinton down by any means possible.

Following the collapse of his political career, he appeared on Dancing with the Stars. Conspiracy theories state that he was booted off early because, despite bringing in the wingnut audience, he so disgusted the rest of the country that they refused to watch. Also, he didn't dance very well.

For a long time, it seemed he was successful but then other events made people realize exactly how incompetent the Republican Party is. Many of those lobbyists who did back the Republicans exclusively then attempted to find common ground with Democrats.

In November 2010, DeLay was found guilty of money laundering and conspiracy. In January 2011, he received a three-year term for the conspiracy charge and five years for the money laundering, although the judge allowed him to accept ten years' probation instead of the latter term.[2] DeLay called the decision "a political campaign" and declared that he only received the sentence because "I was tried in the most liberal county in the state of Texas; indeed, in the United States."[3] Indeed, if he had been tried in a more "tough on crime" jurisdiction, he might have received more years in the hoosgow. You're welcome, Tom.