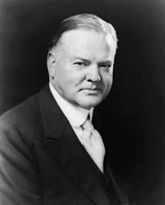 Herbert Hoover was Secretary of Commerce

Hoover's treasury secretary told the public and Hoover to deregulate, and Hoover ran his campaign on a deregulation platform; but in practice, he froze wages across the spectrum (to raise the cost of labor), gave protection to unions, and significantly decreased liquidity using the Federal Reserve. He still blamed Mexican immigrants

for the downturn, and deported hundreds of thousands of Latinos, an estimated 60% of whom were legal residents.

It is not exactly true that Hoover did nothing in response to the Depression. In 1930, the Republican-controlled House of Representatives, in an effort to alleviate the effects of the...Anyone? Anyone? The Great Depression, passed the, anyone? Anyone? The tariff bill? The Smoot-Hawley Tariff Act? Which, anyone? Raised or lowered? Raised tariffs, in an effort to collect more revenue for the federal government. Did it work? Anyone? Anyone know the effects? It did not work, and the United States sank deeper into the Great Depression.

Hoover had actually opposed Smoot-Hawley Tariff Act but then — despite a petition by 1028 economists opposing the bill, and personal lobbying from none other than Henry Ford begging him not to sign it — he signed it anyway.

The Reconstruction Finance Corporation (RFC), later a key part of the New Deal, was also passed during the Hoover administration.

While Hoover is accused of being fairly lazy and doing nothing while the Depression deepened, this is simply grade-school history. Hoover broke with conventional wisdom to a large degree by working closely with businessmen, encouraging them to keep wages up. The RFC bailed out failing banks, though the RFC and the Federal Reserve are blamed for not bailing out enough banks at the time as bank failures continued into the 1930s. The money lent to banks under the RFC did little but sit in the vaults, though, as John Maynard Keynes would later argue, it had become a liquidity trap. The RFC was kept on by FDR and reformed to make lending simpler, leading some to refer to FDR as "Hoover's second term" early in his career.

There was some internal tension between Hoover and elements within his cabinet, especially Treasury Secretary Andrew Mellon. Mellon's advice is now infamous:

Hoover used his opposition to the strict "liquidationist" policy (which was literally "do nothing") to try to build on his "It could have been worse" campaign in 1932, saying:

Of course, the wingnuts like Glenn Beck have seized on this to paint Hoover as one of our first socialist presidents, which is inaccurate to say the least.[note 1] Although Hoover was more pro-active than his predecessors, he still espoused and has become synonymous with rugged individualism. He still believed that private charity would be enough to cure the woes of the Depression and maintained a policy of fiscal conservatism, raising taxes to keep a balanced budget (though the economy was plummeting so fast that even his tax raising didn't always keep pace with diminished receipts, leading to some rather large deficits). Hoover was essentially caught between the rock of his ideology and the hard place of the financial crisis. The above quote is a good demonstration of this contradictory approach. Though some of FDR's policies were based on Hoover's, he ended up being of an entirely different breed. The RFC, especially, was heavily influenced by political favoritism to extend loans under Hoover. FDR abandoned fiscal conservatism entirely (until 1937) and lowered tariffs to avert the trade war that Smoot-Hawley had brought on.

Also of interest — Herbert Hoover was the first Republican Party Presidential candidate to lose the African-American vote. This was due to a collection of factors, including the Depression. However, a larger factor was his behavior as the chief of reconstruction during the 1927 flood. He made many promises to African-American communities, including jobs in the reconstruction efforts and further civil rights reforms when he became president... and then backed away from all of them. This, plus FDR's more progressive civil rights policies, led to the permanent realignment of the majority of African American voters.

See the main article on this topic: Hoover Dam

Hoover has a big concrete dam named after him. During the Depression the dam was temporarily renamed Boulder Dam since there were enough people ticked off at him that they made damn sure no damn dam would be named after him, dammit. The name reverted back to Hoover Dam during the Eisenhower administration. Some folks today still call it Boulder Dam.

Interestingly, Hoover is cited as the only 20th century U.S. president (excepting possibly Jimmy Carter) to not engage in gunboat diplomacy and other imperialistic foreign policy in Latin America. Hoover pulled U.S. Marines out of Nicaragua and initiated a pullout from Haiti as well, stated he did not want the Marines to be the face of the U.S. abroad, refused all requests by United Fruit and other companies for armed intervention by the U.S. during the many 1929-1933 revolts, and at one point his Secretary of State chewed out the president of United Fruit for their activities in Latin America.[2] Hoover's reputation in Latin America suffered anyway because of the Smoot-Hawley Tariff Act which was seen as hindering trade between the U.S. and Latin America.

The same old same old, back when it was original[edit]

Hoover may be the first former president to publicly criticize his successor on a live nationwide radio broadcast. On 7 March 1936, in a speech before the Young Republican League of Colorado,[note 2] Hoover claimed the following:

Despite all this, he ended up on excellent terms with Harry Truman, and ultimately aided him in carrying out a series of administrative changes to strengthen the executive branch; while he still disagreed with the New Deal, he had become convinced that the rise of the Soviet Union required an expansion of the President's powers to counteract.