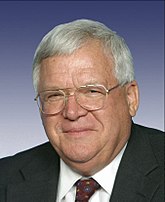 Dennis Hastert was a twenty year member of the United States House of Representatives (R-IL) and Speaker of the House during the George W. Bush administration. During his tenure as Speaker, he pushed through many controversial bills such as the No Child Left Behind Act, the USA Patriot Act, and the Bush-era tax cuts.

He also instituted the "Hastert Rule", an informal House policy where he would only allow votes on bills that had the support of a majority of the Republican representatives, or what was called the "majority of the majority", although technically this meant that bills only supported by a minority of all House representatives (both parties) could be voted upon.

Although he was reelected in 2006, the majority of the House switched to the Democrats that year, and rather than continue on as House Minority Leader, Hastert resigned to take a lucrative lobbying job, where he advocated for things such as increased coal mining and candy-flavored cigarettes.

A champion of fiscal conservatism during his time on the Hill, he forced the State of Illinois to spend several million dollars on a special election just to select his replacement. For further irony, the Republican candidate (perennial candidate and dairy heir Jim “The Milk Dud” Oberweis) then lost both the special election and the next general election.

Well, of course this happened[edit]

In 2015, Hastert was indicted and arraigned for withdrawing too much money from his accounts without declaring the purpose for the withdrawals through a process called structuring,[1] an action made illegal by the Bank Secrecy Act[2] and enforcement of powered by, somewhat ironically, the USA Patriot Act (as a counter-terrorism measure).

Allegations have since surfaced that the money Hastert was withdrawing was hush money being used to pay off a boy he may have molested during his career as a high school wrestling coach. (He had, of course, an extensive history as a legislative homophobe[3] and had even called for child molesters to face life imprisonment.[4])

He initially pled not guilty but on 15 October 2015, his lawyer announced that he would enter a guilty plea on 28 October 2015 in order to avoid trial and publicity.[5] He was jailed for the related banking offences,[6] as the statute of limitations has expired on the child molestation itself.[7]