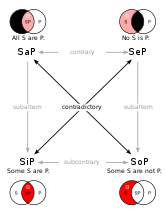 The Square of Opposition for set diagrams

The traditional Square of Opposition is a square used to remember and help with four of the seven operations that can be done with the four types of logical statements. In no specific order, they are the contradiction operation, the contrary, the subcontrary, and the subalternation operations. They relate the four logical statements together in ways that can help us find truth values and make invalid (because of form) syllogisms valid. The Square is arranged affirmative to negative left to right and universal to particular top to bottom. In this way, A is diagonally opposite to O, is vertically above I, and is horizontally across from E. I and O are horizontal from each other, and I is diagonal to E. O is vertically below E.

This operation is quite simple. It involves looking at the truth value of the first statement you have and going diagonally across the square and giving the diagonal statement the opposite truth value. For example, if the O statement 'some bananas are not yellow fruit' is false, using the contradiction operation has us go diagonally to the A statement, 'all bananas are yellow fruit'. If the O is false, it's contradiction must be true.[note 1] This is how a deductive argument can be valid but not sound. All purple animals jump over the Moon; all cows are purple animals; therefore all cows jump over the moon is valid because the premises are assumed to be true, but it isn't sound because in reality it's obviously false. The point here is that just because is that even if something is false in reality, it's assumed to be true for the sake of argument. Remember, A contradicts O and E contradicts I.

Remember, at least one of these must be false. Both cannot be true.

This is probably the one people screw up the most. Don't be that guy. This relationship is between A and I as a vertical relationship and E and O as a vertical relationship. The simplest way to put this is that truth flows downward. If A is true, I must be true as well. The long way to do this is a contradiction to a subcontrary. Contradict from a true A to a false O, the subcontrary the false O to a true I. The short way is the subalternation, which says that truth flows downward. The other half of this operation is that falsity flows upward. If the I is false, the E must be true by contradiction, and a true E by the contrary says that A must be false. Falsity flows upward.

What happens if we screw it up or do it wrong?[edit]

It's fine, but you need to put 'illicit' (we abbreviate it to 'ILL' sometimes) in front of the operation so that everyone knows you screwed up. But it's really fine. Just realise that you made a mistake and own up to it. Otherwise, someone else is going to point out the mistake. Either way though, your logic will be corrected and you can continue making your argument.