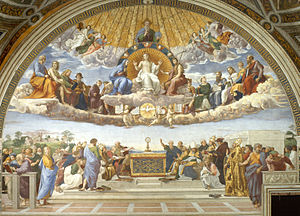 Transubstantiation is the miracle of the Roman Catholic and Eastern Orthodox faiths which occurs during the Eucharist, when the Priest converts the wine and host (a cracker) to the actual blood and body of Christ. This ritualistic cannibalism is a major part of Roman Catholic ceremonies.

Transubstantiation, real presence, and the Eucharist[edit]

(essentially the question of whether or not and to what extent Jesus is actually present in the Eucharist). Other responses to this question include the Eastern Orthodox doctrine which regards the Eucharist as a theological mystery (this deserves its own article, really) but which is otherwise more or less in line with the doctrine of transubstantiation. Many Protestants (especially Anglicans and Lutherans) believe in consubstantiation - the idea that Christ himself and the bread of the wafer are both fully and equally present in the Eucharist. Symbolic presence is the default position of most other denominations, and should not require further explanation.

Note that the original formulation of the doctrine of transubstantiation occurred at a time in the very early history of the Christian church when atomic materialism was not the usual view of natural philosophy. Within the antiquated paradigm it makes a strange sort of sense, but in the present day, it is perhaps one of the most nonsensical rituals in the Catholic church.

So you had best believe it.

Transubstantiation all hangs on a literal interpretation of Matthew 26:26-28, Mark 14:22-24 and Luke 22:17-20, where Jesus is quoted as saying (this one from Matthew) "Jesus took bread, and blessed it, and brake it, and gave it to the disciples, and said, Take, eat; this is my body" and, further on, (from Luke this time) "this do in remembrance of me". It may also originate from John 6. Biblical literalists are left with no doubt—if Jesus said it, it must be true.

The artist Michael Craig-Martin presented a piece of work entitled An Oak Tree in 1973 that perhaps best explains how people think transubstantiation actually works. Despite An Oak Tree consisting of nothing more than a glass of water, the artist declared that it was actually a full grown oak tree. As he explained: "it's not a symbol. I have changed the physical substance of the glass of water into that of an oak tree. I didn't change its appearance. The actual oak tree is physically present, but in the form of a glass of water." So now that's all cleared up, anyone for crackers?

On holidays, Pastafarians eat their host (pasta), which then undergoes transubpastification into the Flying Spaghetti Monster.