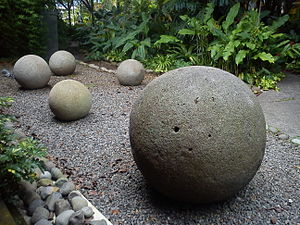 The Diquis Spheres are about 300 stone spheres found in Costa Rica, manufactured by pre-Columbian inhabitants. They range in size from hand-held balls to over two metres in diameter. They are exquisitely worked from a variety of types of local stone and, while not "perfectly spherical", as is sometimes claimed by those offering the spheres as out-of-place artifacts, they do come impressively close. They are named after the Diquis culture, a group of the Chibchan culture.[1]

The stones were first recorded in scattered reports dating to the 1900s[1], but were closely examined starting in the 1930's when fruit company workers cleared land. Initially, some of the spheres were moved and several were drilled and dynamited in a search for hidden treasures. Over three hundred have since been found, the largest about 8 feet in diameter and weighing 16 tons. The spheres are undoubtedly artificial, and while dating is somewhat uncertain the earliest were probably manufactured by 600 BCE while most were created between 1000 CE but before the arrival of Spaniards in 1502.[2]

Archeological excavations from the 1940s linked the spheres to pottery shards and other artifacts typical of pre-Columbian inhabitants.[3] They were manufactured by the Chibchan culture, known for "complex societies developed within the constraints of inequality and formalized hierarchies".[1] One theory is that the placement of the spheres is significant — possibly a star map or similar. As so few of the stones remain in situ due to decades of disturbance and land clearance, and there's limited evidence for any theory that takes the original placement of the stones into account.

The stone spheres are an important cultural and historical symbol for Costa Rica and the Bribri people.

An academic theory from the 1980s noted that limestone can be dissolved by naturally occurring plant acids, which might have helped shape the Costa Rica spheres.[5] However, most of the spheres were created from gabbro,

The uncanny spheres have attracted modern woo, largely based on the early measurements that mistakenly found them to be perfectly spherical even after hundreds or thousands of years of weathering. While they are spherical enough to deceive the eye and awe the onlooker, the "perfect sphere" claim does not stand up to detailed measurement. Neither does the claim that advanced knowledge or technology, beyond that of the ancient cultures of Costa Rica, would be needed to create the stones. Like any other stone sculpture they appear to have been first crudely shaped then painstakingly smoothed and refined. This may represent a level of craftsmanship and an expenditure of person-hours that some modern observers find difficult to grasp but it is far from impossible. We do not need visiting wise men from Atlantis[note 1] nor ancient alien intervention to explain the creation of the Costa Rican stones, which are a poignant and lasting symbol of a unique culture and history.