March for England is an English nationalist campaign group whose focus is, as the name suggests, on organising marches. These range from celebrations of St. George's Day, to anti-European Union demonstrations, to counter demonstrations at Islamist events.[1] Originally named March for the Flag, it was founded in 2007 by members of a fan forum for the Tottenham Hotspur football club.[2][3]

The group's homepage declares that it is non-racist, open to people of all cultures and ethnicities, and "Free from Hardline Extremists of all Religions or facist [sic] groups"[4] Despite this, it has been attacked by left-leaning commentators. Hope not Hate included March for England in its controversial Counter-Jihad report on the grounds that the group has close ties with the English Defence League;[2] the organisation has officially denied such claims;[5] leader Dave Smeeton in particular has publicly criticised the EDL.[6] However, the official MfE Facebook page has linked approvingly to Casuals United.[7]

In May 2009 the group held a demonstration against Islamic extremism; this was accompanied by violence against Asians and Asian-run businesses, which the group officially distanced itself from. The Daily Mail ran an article on the events which painted Dave Smeeton and fellow MfE member Paul Ray (who blogs under the name "Lionheart") as racists, and largely blamed the violence on their organisation.[8] Smeeton and Ray both objected strongly to this characterisation, the latter dismissing the Daily Mail piece as "Left Wing venom".[9] English nationalist writer Tony Linsell suggested that the article was printed because "the establishment" is scared of March for England.[10] 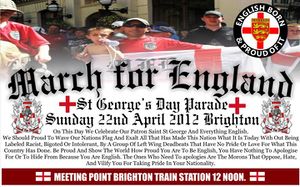 Following the anouncement of a March for England-organised parade in Brighton for St George's Day 2012, local antifascists began organising a protest demonstration with the support of Unite Against Fascism.[11] Some commentators expressed bemusement at the idea of an anti-fascist group protesting family St. George's Day celebrations.[12] It could, perhaps, be something to do with the parade being promoted with a web banner attacking "Left Wing Deadbeats That Have No Pride Or Love For What This Country Has Done"; the phrase "red rag to a bull" comes to mind.

The parade was duly disrupted by anti-fascists, with the planned route being blocked and police diverting the parade to avoid disorder. Two officers were injured when bottles were thrown at them; marchers claimed that food and bottles of urine were thrown by anti-fascists, resulting in children being injured. These reports have not been confirmed[13] but it is hardly unheard of for antifascist groups to end up causing more violence than whoever they're protesting against.[14]

During the 2013 St. George's Day march, a 25-year-old nurse who was not involved in either the march or the counter protest received an injury to the eye, apparently after being hit by something thrown at two people nearby. Which side the assailant was on is currently unknown.[15]

The group has a strong dislike of Brighton's Argus newspaper, calling for a boycott and making vague threats towards its journalists as a result of what it considers to be one-sided reporting.[7]

While it is debatable as to whether March for England can be fairly described as an extremist organisation, it certainly appears to have attracted an extremist element: in one video of its 2012 Brighton march somebody be seen brandishing a banner advertising Englisc-Gateway.com, home of the really rather racist Anglo-Saxon Foundation forum.[16] The 2013 St. George's Day march, meanwhile, was attended by members of Stormfront.[17]