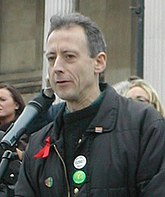 Peter Tatchell (b. 1952) is an Australian-born British activist, mostly known for his work for gay rights, but dipping his fingers into human rights, environmental issues, the Iraq War, race issues, sexual liberation and animal rights. He is perhaps best known for his two attempts to perform a citizen's arrest of Robert Mugabe.[1][2] Unfortunately, due to severe beatings at the hands of Mugabe's bodyguards and neo-Nazis in Moscow, he has suffered permanent brain damage, which has caused him to abandon his life-long aspiration to become a member of Parliament.[3]

Like many leftie/socialist types in Britain, he was a lifelong supporter of the Labour Party, but after the Iraq War, and Tony Blair turning into an authoritarian stresshead, it got too much for him and he left. He is now a member of the Green Party.

In 1997, he sent a rather curious letter to The Guardian on the subject of paedophilia:

ROS Coward (Why Dares to Speak says nothing useful, June 23) thinks it is 'shocking' that Gay Men's Press has published a book, Dares To Speak, which challenges the assumption that all sex involving children and adults is abusive. I think it is courageous.

The distinguished psychologists and anthropologists cited in this book deserve to be heard. Offering a rational, informed perspective on sexual relations between younger and older people, they document examples of societies where consenting inter-generational sex is considered normal, beneficial and enjoyable by old and young alike. Prof Gilbert Herdt points to the Sambia tribe of Papua New Guinea, where all young boys have sex with older warriors as part of their initiation into manhood. Far from being harmed, Prof Herdt says the boys grow up to be happy, well-adjusted husbands and fathers.

The positive nature of some child-adult sexual relationships is not confined to non-Western cultures. Several of my friends - gay and straight, male and female - had sex with adults from the ages of nine to 13. None feel they were abused. All say it was their conscious choice and gave them great joy.

While it may be impossible to condone paedophilia, it is time society acknowledged the truth that not all sex involving children is unwanted, abusive and harmful.[4]

The Guardian later printed letters attacking Tatchell's comments. One, from Marjorie Orr of Accuracy About Abuse, pointed out that Joseph Geraci — one of the "distinguished" individuals involved in the book — edited a Dutch pro-paedophilia journal called Paidika.[5] This prompted Tatchell to try to clarify his views: "By writing that 'not all sex involving children is unwanted, abusive and harmful', I was clearly implying that most of it is abusive. It is absurd to say that because I acknowledge some exceptions, I am denying the suffering of those who have been abused."[6]

He has continued to be criticised for his letter. A 2010 article by Peter Hitchens reprinted most of Tatchell's remarks; Hitchens commented that, by describing the publishers of the book in question as "courageous", Tatchell had gone further than his stated aim of merely opposing censorship.[7]

A doctored photo has been posted on several websites, including the official site of the BNP, showing Tatchell carrying a placard with his comment that "not all sex involving children is unwanted" Photoshopped onto it.[8][9]

He has also stated, when clarifying his calls for the age of consent to be lowered to 14, that he does not condone adults having sex with children or anyone having sex under 16, but simply doesn't want under-16s to be given a criminal record or put on the sex offender's register for having sex.[10]

He has been accused of Islamophobia and racism by other left-wingers, for instance by Islamophobia Watch[11] and by academics Jin Haritaworn, Tamsila Tauqir, and Esra Erdem.[12] This seems to be due to his attacks on anti-gay Muslims and Islamic nations which criminalise homosexuality. He has called for gays and Muslims to unite and combat prejudice against both groups.[13] Although he clearly sees gay rights as the chief object of his campaigning and is not afraid to criticize Muslims when they are homophobic, that can hardly be compared to the far-right's irrational and all-encompassing hatred of Islam.