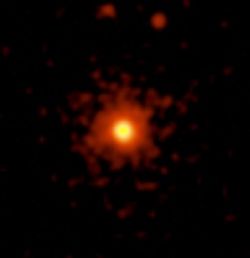 I'm Proxima Centauri here and at a number of other Wikis. I try to follow the scientific method and like to refute religious ideas that go against science.

The Aliens of the Flaming Red Sun

Is religion or Non-belief better for society?

On Atheism wiki I started a page with the title Can Decline in religious belief improve society?.

For the case against religion see:-

Should atheists shut up?

The tone of the section below is very forceful, I wrote it in the middle of a battle with a user who claims to be an atheist accomodationist and was very humiliating with efforts to shut me up.
Even liberal Christians generally want atheists to shut up while they tell everyone how good they think Christianity is and indoctrinate educate the young. Accommodationism means keeping quiet while Christians keep on promoting their view. Christians and other believers on either side of the Atlantic Ocean see any attempt to promote an atheistic or naturalistic viewpoint as a threat to their beliefs. Believers are only satisfied if we shut up entirely about good points in atheism and reasons to be an atheist.

The quote below is from an American atheist lady, UK Christians are in the main more tolerant than the quote suggests provided we keep quiet and don't actively promote atheism.

Should we let a minority pressure us into being nicer to Christians? Should RationalWiki become a website where atheists feel uncomfortable about editing Articles on Christianity. Should atheist editors here fear some sanctimonious editor might come along and tell us what we’ve written is all wrong?

Below are several websites that say as atheists we should speak our minds.

We need to refute claims that Atheists aren’t moral or are morally defective.

I think we should all feel thoroughly insulted. I’ve started refuting the idea of Christian superiority in the article Christian morality which is linked to the Main Page. Here a Baptist Pastor thinks he’s morally better than we are despite his unkindness. The team here can do much better than I can single handed.

It will be cool if we can have articles about Christian morality on this website, we have one on Secular humanism.

I'm Proxima Centauri. It seems I'm roughly 4.2 light years away but no other star is closer to the Solar System than I am. I’m just that bit troublesome. I flare up unpredictably. Some scientists who’ve been quoted at Wikipedia think stars like me could have life sustaining planets. Others think that’s impossible.
See Habitability of red dwarf systems

I've done this more than once.

I've escaped a rangeblock when I changed my Internet Service Provider. I added a serious edit that the paranoid sysops might have mistaken for vandalism. As of now that edit refering readers to a very sensible website has remained and I hope my edit will remain undetected acceptable to a new class of more liberal CP sysops for years.