Being a sysop or Administrator[1] at Conservapedia is not a task one should undertake lightly. Sysops on CP serve as a group of henchmen, or goon squad, run by Andrew Schlafly. As anyone who's watched more than three Bond films knows, henchmen rarely reach the end of the film unscathed. If someone attacks your boss, your job is to take the bullet. If a big boulder is rolling down a hill at the boss, shove him out of the way. Usually, henchmen wear tight-fitting red jumpsuits without undergarments, and this is how CP Sysops are typically dressed as they revert your trolling comments from their multi-screen 3D supercomputers in their glass corner offices Dells in their trailers.

Not all who have blocking power at Conservapedia are called sysops. It's quite complicated, because Schlafly has created a series of smaller "user rights" packages, including making "upload file" and "editing between 0:31 and 7:01 (EST)" special rights. But mostly what gets a non-sysop added to this list are the coveted and dreaded "blocking" rights. In fact blocking abilities are often given before editing or uploading rights.

Theoretically, those editors who are given blocking rights but not promoted to Administrator status are expected to use their blocking powers only to protect the site from vandalism. Over time this rule has been relaxed, and some of these individuals clearly regard themselves as sysops in all but name, blocking lesser users for numerous trivial transgressions.

Ultimately, it became clear that not everyone was able to maintain the level of ignorance, hypocrisy, tyranny and self-righteousness required at Conservapedia. Only a few sysops of the highest caliber have the mental fortitude to continue contributing on a semi-regular basis. As such, the list of currently active sysops (who make about 1/3rd of all the edits there) has shrunk to just seven. None of those who remain make any attempt at producing an encyclopedia any more, but rather link whore their own blogs, or use the front page as their personal twitter stream.

See Conservapedia:Newcomer's Guide for a more detailed guide to the major players. 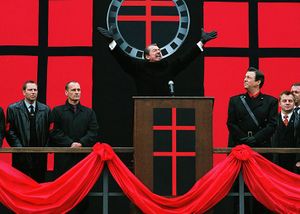 These sysops are leaving rapidly!! 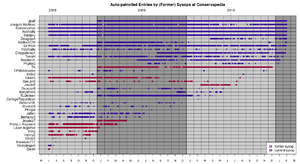 How to become a CP sysop[edit]

Just how do you become a sysop at CP? Like BethanyS it's by making a lot of edits, being well groomed and educating Andy Schlafly, as well as "being there" during a vandal attack, that's how. But lets have a look in detail at those edits. I have taken some figures (16:04, 5 June 2007 EST) and broken down her contributions since 8 December 2006. This is her complete edit history!

And of those short articles:

Note that big sister SharonS often has to help out by improving the articles afterwards.

Criteria for sysopship include: two pieces of ID, a personal reference from a teacher, lawyer or clergyman, a notarised written personal guarantee and a sample of DNA.