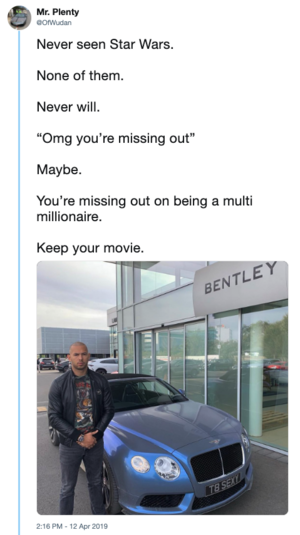 yes, note the theory of death because of cucumber is a multidimensional topic. surely it's an act of violence but it is also a hippie trip. the undertones call for farmers whose income was trashed by eu to turn around their lives and change more than eu will ever change. that's pretty inside though --Swedmann (talk) 13:00, 11 January 2010 (UTC)

Nice pre-emptive strike: if I think it's rubbish, which I do, it's because I don't appreciate art! Failed Goth? I have just eaten

note the theory of death because of cucumber is a multidimensional topic. I'm not sure that we are on the same planet I'm afraid.--BobIt's cold! 13:32, 11 January 2010 (UTC)

(thinks) Is it one of those computer generated things? I have just eaten

As Randall Munroe put it: Communicating badly and then acting smug when you're misunderstood is not cleverness. Tetronian you're clueless 14:33, 11 January 2010 (UTC)

all glory to men in black hats, I was trying to point out art is about meanings. How does broken english mixed with å come out? I see å as an aggressive and a bit gay letter, although the 'fufufufufuffu' aspect could override everything before you finish the text --Swedmann (talk) 15:36, 11 January 2010 (UTC)

My guess would be a chatterbot - though the WP article begins - "a computer program designed to simulate an intelligent conversation", and I'm not sure if it manages that.--BobIt's cold! 19:51, 11 January 2010 (UTC)

Ha! it's a person trying to persuade us it's a machine. Success! Now piss off. I have just eaten

Cool. Now, bears are watching you to make sure you don't reveal their secrets. China gave the world panda bears and got Tibet in exchange. --Swedmann (talk) 20:34, 18 January 2010 (UTC)

Since you seem to have met our horribly low high standards of "mostly harmless," I have made you a sysop. Here's your boyscout handbook. Punky Your mental puke relief 22:08, 18 January 2010 (UTC)