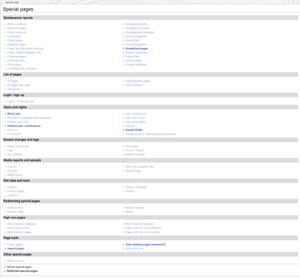 So you logged into RW and discovered that you have extra buttons. Commiserations, you are now a RationalWiki glorified janitor Sysop™!

What's a sysop? Sysops ("system operators" or "administrators") are the gods of most wikis. To be made a Sysop is a boastable offense on other wikis (to show how awesome other wikis think you are), however, on RationalWiki, pretty much anyone who isn't an obvious vandal is made a Sysop soon after signing up. Sysops with a mighty click can cast down empires, shatter user accounts, and create an impenetrable wall between random trolls and the evil non-Euclidean vandals who lurk beyond our recent changes page. As such, give thanks to us yourself, or ye shall surely be lost.

There are at present 1,178 sysops on RationalWiki.[note 1] When this number hit 666, everyone got cake.[citation NOT needed]

In the Monobook skin, sysops get extra editing tabs.
(Depending on your "gadgets" choice in your "Preferences")

In the default vector skin, sysops get extra editing tabs as well

There are six things you will see now that are different.

One which we pretty much ignore, but might freak you out at first, is the little red exclamation points (!) all over your "watchlist" and "recent changes", and the phrases "patrolled" and "mark as patrolled" turning up here and there. The exclamation points mark edits made by non-sysops and IPs which have not yet been vetted, or "patrolled" in wikispeak. This allows sysops to check these edits and confirm that they aren't wandalism or incompetent. Edits by sysops, friendly robots, and pies are automatically marked "patrolled".

To patrol an edit, click the word 'diff' where it says "(diff | hist)" and click "Mark as patrolled" - CTRL + F will help you to find this - if it is a sane edit. To mark a new page as patrolled, simply view the page, and a link will be displayed at the bottom-right to mark it as patrolled, once again, if it appears halfway coherent and sane, within our definitions of "sane".

If you come across a change that is obviously wrong or plain vandalism, check if this is fixed later in the history. If that is the case, you can mark the bad change as patrolled to avoid cluttering up the patrol list with edits that are fixed.

Checking edits by unknown contributors for untruth, fabrication or plagiarism is one of the essential tasks to maintaining a wiki. To help with this task, it is recommended that you add all articles within your area of expertise to your watchlist.

Remember to go on regular patrols!

Difflinks and permalinks are specific to wikis. They are better than straight links in that they hold a "snapshot" of the target site at a particular time.

A "permalink" will show the wiki page as you saw it. A "difflink" will also show the edit (or consecutive edits) you chose to highlight, and who did it.

To create a difflink, click on history in views, for the page, select the particular difference required and copy the address. The address can then be pasted into an editor program for subsequent use in a page edit.

Permalinks are made by clicking on permanent link in toolbox. Then copy and paste as above.

Difflinks and permalinks should be treated as full http links when inserting into a page or article.

Some blogs and other types of web page have 'snapshotable' pages but cannot be generalised. Individual blog pages can, of course, be referred to but can be subsequently altered by the blog poster.

There is a better way of doing this, for the more advanced users, for permalinks:

You will see a downward-pointing arrow among the tabs across the top of most pages, between "Fossil record" and "Search", just after the star: click the arrow and a menu appears containing the options "Vaporize," "Relocate," and "Protect." The "Vaporize" option allows deletion of unwanted pages - useless redirects left behind after pagemoves, for instance. Talk pages should be left in place, unless they are simply mistitled redirects.

With the exception of obvious spam or vandalism, articles or files should not be deleted without first discussing and finding agreement with other editors. For guidelines on page deletion, see the relevant section of the Community Standards.

If you delete a page that is pointed to by other pages it will create a "wanted page" upon deletion. It is best to click on "what links here" before deleting, to see if there are links to the page. Edit those pages to reflect that this page no longer exists. In other words, remove the [[ and the ]] from the pages that are pointing to the ex-page, or change the links to go to the new page name, if it was moved.

If you find one of those snarky "pretend" links, that conflates a word or phrase with the actual link target, putting "nowiki" tags around it will preserve the original joker's intent. This only applies to talk pages.

See the main article on this topic: RationalWiki:Blocking policy

Blocking should never occur if somebody is attempting to discuss an issue in a reasonable manner. Blocking is not to censor alternate opinions, but to prevent disorder.

Blocking should only be used if somebody is maliciously editing a page or pages.

RationalWiki has a special "vandal bin" feature, which restricts its members' edits to 1 edit per 30 minutes, making spamming and vandalism significantly less rewarding. If somebody is persistent, but not clearly a vandal, it may be useful to restrict their edit rate, but not block them.

Another tab you will see is used to restrict editing of a page. In most cases, it will say "Protect", since very few pages here are protected. In the case of a protected page, it will say "Change protection". We generally find it unnecessary to do this. However, from time to time a hot vandal target may be locked so only registered users can edit it.

Please note that when setting indefinite protections (which are generally disfavored except on your own userpage or on templates that are directly transcluded on a really, really huge number of pages), it's better to just make it indefinite rather than for many thousands of years, as setting such ridiculously large expiration dates can mess up certain special pages.

Sysops have the ability to manage some user rights. You can add and remove the sysop and autopatrolled groups. For advice on how to decide whom to make sysops, you can see the now-deprecated bureaucrat guide; or, you can observe how others seem to be making the decision. Per the community standards, don't remove established sysops' rights unless there is an emergency — if you think a sysop has abused their powers and should be stripped of their sysopship, in the past such questions have been taken up at the chicken coop page.

Adding "autopatrolled" simply removes the exclamation marks non-sysops ordinarily would leave on Recent Changes. There are no official guidelines on its usage, but it has become a sort of trust tier between general editor and sysop. Generally, if a user has sufficiently established themselves as trustworthy enough to not require constant monitoring, they are added to this group. Autopatrolled does not add any attributes or abilities not granted by the sysop usergroup, so it's essentially redundant to add both groups.

If you want to, you can add {{Sysop pledge}} to your user or talk pages, to include this: