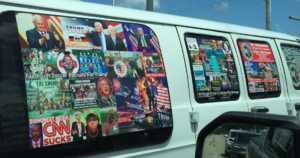 This vehicle doesn't immediately scream "crazy bomber," but having this offered as an explanation is somewhat unsurprising. Note the images of public figures with crosshairs.

The 2018 United States mail bombing attempts refers to an incident in late October 2018 wherein fifteen pipe bombs were mailed to various Democratic politicians and public figures known to be prominent critics of Donald Trump.[1] The bombing attempts started on October 22nd, 2018, and the last package was intercepted by the FBI in Atlanta, Georgia on the 29th.

On the 26th, a 56-year-old man named Cesar Sayoc was arrested and faced federal charges in relation to the attempted attacks.[2] He's the proud owner of the Kookmobile pictured on the right, which earned him the lovely nickname "MAGA Bomber".[3] The FBI and the United States government consider him to be a domestic terrorist,[4] because he freaking is.[citation NOT needed]

Luckily, no one was injured and none of the bombs actually detonated.[5]

On August 5, 2019, Sayoc was sentenced to 20 years in federal prison.[6] Judge Rakoff, a vocal advocate against mass incarceration,[7] stated that he believed Sayoc "was fully capable of concocting pipe bombs capable of exploding," and since he didn't, the ineffectual nature of the devices were "in the court's view, a conscious choice." Sayoc will still be nearly 80 before he can be considered for release on good behavior.

General summary and timeline of events[edit] 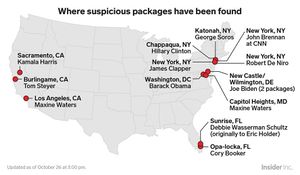 Locations of the bombing attempts in the USA that Trump should care about.[18]

Although Trump did condemn the attack and compliment law enforcement for their arrest of Sayoc, one of his tweets appeared to convey a very different attitude:

Of course, Trump also later went back to his usual antics, attacking the (zing!) liberal media for "exploiting the case". He bears, but does not acknowledge, substantial responsibility for the deteriorating civility of the ever-polarizing dialogue between differing political opinions in the US (conservatives and liberals) that had fueled this incident.[20]

One of the packages containing an explosive device. Note clever misdirection on the label. That sure fooled 'em.

Quite unsurprisingly, quite a few of Donald Trump's die-hard fanboys were quite outraged by the media's reaction to this incident as well, and many began spouting their usual rhetoric; one of them tweeted:

The commenter seems to forget, if anything, that both parties strongly condemned the baseball shooting

, and no one in mainstream media brought up false flag conspiracies (unlike right wing pundits including Rush Limbaugh, Bill Mitchell, Ann Coulter, Michael Savage, Candace Owens, Geraldo Rivera, and Donald Trump Jr.- all of whom have done so in this incident[22]). The accusations of hypocrisy are unfounded. Most pundits have only doubled-down on their remarks (Geraldo Rivera is a notable exception). Ann Coulter, for instance, has deflected her attacks to her accusation that immigrants are more likely to cause political violence anyway (this is not true, and it's not like an immigrant was even involved in this incident!). This behavior is an example of classic Whataboutism by right-wing pundits who can blame incidents on liberals no matter the outcome and shirk responsibility when their own side has people in huge media platforms and high positions of power that repeatedly attack the press and call for violence.

After his arrest in October 2018, Sayoc later pleaded guilty in March 2019 to the charges of mailing explosive devices.[23] Sayoc's defense team argued that he "lost everything in the Great Recession", had "cognitive limitations and severe learning disabilities" and "abandoned by his father and sexually abused by a teacher at his Catholic school".[24] After that, they said, Sayoc became a disturbed man who was obsessed with watching Fox News and fantasizing about Donald Trump.

Prosecutors sought a life sentence for Sayoc, but the judge agreed with the defense that Sayoc had intended to intimidate rather than kill and sentenced him to 20 years in federal prison.[25]