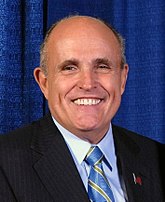 Rudolph "Rudy" Giuliani[4] (1944–) is a decrepit former Republican Mayor of New York City, one-time World Hero, one of the more hopeless candidates in the 2008 Presidential election, and shameless shill and ratfucker for Donald Trump. Before 9/11, he was best-known for dressing up in drag bringing down the Mafia commission.

Like a bad case of groin rash, he resurfaces every 4 years to pontificate about America-haters.[5]

Giuliani ordinarily wouldn't have stood a chance in such a heavily Democratic city, but a combination of a sky-high crime rate and ridiculous corruption in the state Democratic Party in the early 1990s meant there was something of an appetite for change. But even then, he would likely have gone down in flames but for a ballot initiative on Staten Island secession that year; this drew an unusual number of voters from said borough (which is somewhat more Republican-leaning than the rest of the city) and led him to a narrow victory over incumbent David Dinkins.

Giuliani was essentially a fiscal conservative, but socially liberal on issues such as abortion and gay rights (he started as a Democrat, and has been a Republican only since the 1980s). Under his stewardship, the gentrification of New York City began in earnest. While some unambiguously good things came of this, notably his breaking the nearly century-long stranglehold organized crime had on the Fulton Fish Market

, Giuliani told his officers to ramp up use of force against vagrants, street vendors, and streetwalkers, even arresting them for jaywalking. Even the thing he gets the most universal credit for, getting the infamous squeegee men off the streets (which actually was was a significant problem on many levels), really happened months before he took office and (by his own admission) had nothing to do with him.

He wasn't well liked, and after a string of sex scandals and the unprovoked shooting of Amadou Diallo — in which NYPD officers unloaded 41 bullets on an immigrant outside his home (all four officers walked) — he knew he would never be remembered as one of the great mayors.

September 11th happened. Rudy was a media darling for a while,[6] and his book became a best-seller. Then he decided to run for President and remind everyone why they disliked him. Regrettably, his campaign was hijacked by the American Taliban, morphing him into a kind of proto-Palin. Since then, he's stopped talking sense altogether, endorsing all manner of far-right fundie nutcases.

You kind of feel bad for him, because cancer took away a senate seat that should've been his. And the sad thing is, he could've been President if the election were held in the days after the WTC attacks. The proffered seat denied was what darkened Rudy's soul, and convinced him to milk 9/11 as the basis of his career.

It wasn't just the cancer that made him drop out of the senate race. He also had an affair with Judy Rankin and then publicly put his wife through the wringer in the divorce process. So...the sympathy only goes so far there.

Why he should never be president[edit]

This may be contrasted with Benjamin Franklin's famous quote:

His strategy for the election was to do nothing until Florida voted. And crowing about how he single-highhandedly saved the world on 9/11. (Continuously.) Unfortunately, that didn't work at all.[10] In fact, it ended up with Giuliani becoming one of the first candidates to drop from the race, which he did on January 30, 2008. Moral: Don't ignore Iowa, New Hampshire, Nevada, Wyoming, and South Carolina, even if they are the "flyovers."

Gentlemen, you can't fight in here[edit]

After dropping out, Giuliani endorsed McCain, possibly to try and angle for the VP slot (which didn't happen). Later, in a feeble attempt to try for both President and Vice-President, Giuliani and another also-ran decided to make trouble at the Democratic National Convention:[11] They established an on-site "war room" to grab media attention and spew nonsense about the Obama campaign. Just like their respective campaigns, this was a laughable failure.

That which is not alive cannot die[edit]

Giuliani never gives up, evidenced by the fact that it was possible to contribute to his 2008 primary bid some time after the election.[13]

Ghoulinani's name came up in speculations about Trump's pick for Attorney General, or even Secretary of State. They have Rudy on tape talking about having tricks up their sleeve and laughing maniacally, two days before the FBI letter blew Hillary Clinton's campaign out of the water.[14] In addition, Rudy has Putin connections.[15] Trump didn't appreciate Rudy almost blowing their cover and gave him the axe. "It didn't work out," said Rudy, wistfully looking at a phone which never rings.[16]

Giuliani finally wormed his way into an actual position (sort of) in the Trump Administration when it was announced in April 2018 that he would be the new lead counsel on the team representing Trump in the ongoing federal probe into Russia's election interference.[20] While working as Trump's attorney, Giuliani admitted that he has not registered as lobbyist for foreign governments, a violation of the Foreign Agent Registration Act (FARA), which can result in a 5-year prison sentence and $10,000 fine, though it is rarely prosecuted.[21] Giuliani has clients from Brazil and Colombia.[21] More alarmingly, Giuliani represents the city of Kharkiv, Ukraine, whose mayor belongs to the pro-Russia Party of Regions, as well as the Mujahideen-e-Khalq,

which advocates the violent overthrow of the Iranian government.[21]

A whistleblower came forward in September 2019 reporting that Trump himself and through his lawyer, Giuliani, had been attempting to put Trump's personal interests before that of the United States,[22] an impeachable offense.[23] In defending the actions to get Ukraine to meddle in the 2020 US presidential election on behalf of Trump, Giuliani insinuated that the whistleblower is part of the deep state conspiracy theory.[24]

During the years of the Donald Trump administration, and particularly during the time of the Trump-Ukraine scandal (when Giuliani was attempting to acquire "dirt" on Hunter Biden in order to ratfuck Joe Biden in the 2020 election), Giuliani started accumulating acquaintances with many shady politicians and other unsavory types, particularly Russia-friendly figures from Ukraine.[note 1] In October 2019, two Soviet-born associates of Giuliani, Lev Parnas

, were arrested in America for campaign finance violations.[26][note 2] By 2020, with the presidential election coming up, many other shady characters were known to be in Giuliani's orbit — names like Andriy Derkach

(a Russian agent and troll), Kostyantyn Kulyk (a military prosecutor charged, but never convicted of corruption, with ties to a Ukrainian warlord working for Russian intelligence), Oleksandr Onsychchenko (a Russia gas industry tycoon who fled his native country when accused of embezzlement), Dmitry Firtash

(an energy tycoon with deep ties to the Kremlin who was wanted in the United States on bribery and racketeering charges), Ihor Kolomoisky

As part of a criminal investigation connected to Giuliani's dealings with Ukraine, on April 28, 2021, the New York Times reported that federal investigators in Manhattan executed search warrants at Giuliani's home and office.[32] A search warrant was also instigated at the home of Victoria Toensing

, a lawyer close to Giuliani who had also represented Firtash.[32]

In late 2020, "America's mayor", having been exposed to the Donald Trump virus, went completely insane.

According to a $1.3 billion lawsuit against Giuliani by Dominion Voting Systems, all of his conspiracist bullshit pushing was only a means to the end of selling product.[70] Giuliani has become a product 'influencer', and has been hawking gold coins, silver, nutritional supplements, cigars, a "conservative alternative" to AARP, and protection from 'cyber thieves'.[70] Yes, Mr. Kremlin wants to protect you from cyber criminals.

Due to the multiple false statements Giuliani made about the 2020 U.S. presidential election, on June 24, 2021, a New York state appeals court suspended Giuliani's license to practice law in that state.[71][72]